Tabiti, 27, hasn’t minced words when it comes to who he thinks will win, as he explained to Boxing Scene:

This fight means a lot to me. This is a chance for me to become the American face of cruiserweights just like Steve Cunningham was. I’m taking this very seriously and I have great respect for Steve Cunningham, but this is my time to take it. I’m ready to be a fresh face in the cruiserweight division. I’m going to give it everything I have. I’m humbled by this experience and I’m going to take advantage of it.

Here’s what you need to know about Andrew Tabiti:

1. He Had a Strenuous Relationship With His Family Growing Up

Tabiti was born in Chicago, Illinois in 1989. In an interview with the Las Vegas Sun, Tabiti spoke on his childhood and the hardships he faced growing up. “I had some family issues. When I was young I stayed from house-to-house,” he revealed, “My mom really wasn’t there for me all that much.” Tabiti and and his family eventually moved to Las Vegas in 2005, where he discovered a passion for boxing.

When his mother decided to move again in 2007, Tabiti was forced to choose between going with his family and pursuing a career in boxing. “I came out here with my mom and two sisters. They had problems and ended up leaving. I thought about leaving too, but I had met Gil [Martinez] and was starting to get serious. I decided to stay here and pursue my boxing.”

Tabiti quickly proved his decision to be worthwhile. “When some of those guys are getting ready for a fight, ” says Martinez, a striking coach for Xtreme Couture, “I don’t like to throw Andrew in there because I like their confidence to be high. You get a kid that’s 20 years old with 11 amateur fights and he’s putting his hands on you? It’s not the best thing for your ego.”

2. He’s Currently Undefeated With a Record of 14-0

Since turning pro in 2013, Tabiti has seen nothing but success inside the ring. He has a professional record summary of 14-0, while scoring knockouts in each of his first 10 fights. In May 2016, Tabiti defeated Keith Tapia to win the vacant NABF (North American Boxing Federation) Cruiserweight title. In February of this year, he defended his title by defeating Quantis Graves in six rounds.

In an interview with Las Vegas Journal-Report, he reflected on the success he’s had up to this point. “It’s been a wonderful experience,” he said, “I’m a little surprised by how far I’ve come so quickly. It’s a little overwhelming at times when I think about it.”

In 2012, Tabiti was overlooked for the World Boxing Super Series cruiserweight tournament that could crown the No. 1 champion in the division. When asked about being passed over, he told Las Vegas Review-Journal “They needed an American there,” Tabiti said. “I wanted to represent the United States. The cruiserweight division is slept on here. It’s a stacked field, and I want to put it on the map.”

Former welterweight Floyd Mayweather, Sr. has been working with a lot of fighters at Las Vegas’ Mayweather Boxing Club, which is owned by his son. One of these fighters was, for a brief time, Tabiti. Mayweather, Sr. worked with him between 2014 and 2016, including the period in which Tabiti became the NABF Cruiserweight champion.

Last October, however, Mayweather, Sr. revealed that he is no longer in Tabiti’s corner. He claimed that the fighter had just stopped coming around and that he may have hooked up with another trainer: “Well, I ain’t gonna talk about Tabiti no more, I don’t know where Tabiti is at.”

“I haven’t seen him for about at least two or three weeks, so I don’t know where Tabiti’s at, and that’s on him if he wants to choose to go someplace else, that’s on him,” he told On The Ropes Boxing Radio. “It ain’t on me, that’s on him. I just do my thing so, I’ve gotta do what I’m gonna do with him, or without him.”

He added: “It don’t make any difference with me, you know. Its real. So I’m just telling you that right now, I’ve got guys coming in right now and this other guys getting me guys right now, he’s [Mayweather, Jr.] bringing them in from out of town. I train different guys all the time.”

Despite this, Las Vegas Review-Journal states that Mayweather, Sr. trained Tabiti for his fight against Cunningham.

Despite his brief falling out with Floyd Mayweather, Sr., Tabiti is still signed to his son’s Mayweather Promotions company. On his website profile, it states that Tabiti, nicknamed “The Beast”, attribute his method to studying the likes of “James Toney, Evander Holyfield, Roy Jones and Floyd Mayweather – boxing inspirations who have molded his technique and buttressed his fighting intelligence.”

In addition to these inspirations, the profile also paints a portrait of Tabiti in his personal life, from his favorite films to his favorite foods:

Unlike most people his age, Tabiti’s quest for a simple life outside of the ring has him relaxing at home, discovering new music, and spending quality time with his family. He suspects he would be a professional trainer if he was not a professional boxer. Pizza, ice cream, and popular Mexican chain Chipotle are a few of his favorite foods. He also confesses that “Blood and Bone” is his favorite movie. In a world where it seems filtering yourself has become a thing of the past, some may find it interesting that Tabiti refrains from using profanity in his everyday life.

5. He Says He Wants to Become a ‘Household Name’

Despite Tabiti’s refrain from profanity, he’s happy to carry on the boxing tradition of confidence, stating that he plans to become a ‘household name’ after his victory over Cunningham. “There hasn’t really been any nerves,” he told Round by Round Boxing, “To be honest, I feel like I should be here and I’m comfortable with it.”

Tabiti went on to discuss his career as a whole, saying “When people watch me fight, they can expect to see a well rounded fighter… The key to success is to have tunnel vision. If you’re a fighter and you don’t have it, you can get lost in the sauce. Luckily, I have tunnel vision. I stay focused on what I need to have going on.”

He added “I want to build myself as a household name in boxing and yeah, I’d love to do it by shining a light on the Cruiserweight division.” As for the age difference between him and his opponent, Tabiti told Las Vegas Review-Journal “I’m not trying to be in the game as long as Steve Cunningham. I want to leave at the right time. Get my money and be world champion, and maybe fight heavyweight and get out of the game.” 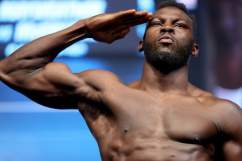 Read More
Boxing, Conor McGregor, Floyd Mayweather
Andrew Tabiti will be fighting on the undercard of the Mayweather vs. McGregor fight. Learn about Tabiti here.