Getty Jordan Matthews was traded from the Philadelphia Eagles to the Buffalo Bills on August 11.

Less than one month before to the start of the season, the Buffalo Bills are making moves to shore up their roster.

We've acquired CB E.J. Gaines and a 2018 2nd round pick from the Rams for WR Sammy Watkins and a 2018 6th round pick. pic.twitter.com/jssDP1sVBw

The move seems as if it could be a lateral one for the Bills, as Matthews and Watkins bring similar abilities and statlines through their first three seasons in the league. But the addition of Matthews at the No. 1 receiver spot on the depth chart gives the Bills a proven weapon for quarterback Tyrod Taylor.

Matthews will be joined by Anquan Boldin, who Buffalo signed to a contract just days ago. In addition to the pair, Brandon Tate will likely grab the No. 3 slot, and a slew of others are looking to claim the fourth and fifth receiver spots.

Matthews was drafted by the Eagles in the second round of the 2014 draft out of Vanderbilt University, and he’s been a proven commodity. He’s recorded at least 800 yards receiving in each of his three seasons, and has been a prime target for the Eagles’ quarterbacks every season.

Watkins, on the other hand, was often injured, but many are looking to him to have another breakthrough season. During his rookie season, he caught 65 passes for 982 yards and 6 touchdowns. He followed that season up by catching 60 passes for a career-best 1,047 yards and 9 touchdowns.

Last season, though, Watkins broke a bone in his foot and had a screw surgically installed. He missed the first half of the season and was finally activated off the injured reserve list prior to Week 12. In eight games, he hauled in 28 passes for 430 yards and 2 touchdowns. He was due to be a free agent after the upcoming season when the Bills declined his fifth-year option in May.

The trade puts Watkins alongside former Bills teammate Robert Woods, who was signed by the Rams in March. 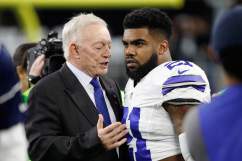 What Is the NFL Investigating Cowboys RB Ezekiel Elliott For?