Getty Kyrie Irving (left) and Isaiah Thomas will be switching teams, as the Cavaliers have dealt Irving to the Celtics in exchange for Thomas, Jae Crowder, Ante Zizic, and Brooklyn's 2018 first round pick.

A little less than a month ago Kyrie Irving stunned the basketball world and demanded a trade from the Cleveland Cavaliers — the team he has gone to three straight NBA Finals with, winning one in 2016.

Well, ask and you shall receive.

According the Vertical’s Shams Charania, the Cavaliers have agreed to send Irving to the Boston Celtics — last year’s opponent in the Eastern Conference Finals.

Cleveland and Boston have agreement on deal to send Kyrie Irving to the Celtics for Isaiah Thomas package to Cavs, sources tell The Vertical

In return, the Cavaliers will receive All-Star point guard Isaiah Thomas, forward Jae Crowder, center Ante Zizic, the Brooklyn Nets’ 2018 first round pick — which Boston acquired from the Nets in 2014, and a 2020 second round pick.

Here’s an early look at the Cavaliers roster heading into the 2017-2018 season:

*Wade signed a one-year, $2.3 million deal with Cleveland in late September after being bought out by the Chicago Bulls.

Does this trade make the Cavaliers better? That’s tough to say. Thomas has emerged as a dynamic offensive threat over the past two seasons, having averaged 22.2 and 28.9 ppg, respectively. But for all the gifts he has on the offensive end of the court, he has just as many deficiencies defensively. His 5’9″, 185 pound frame makes him a liability matchup wise — leaving you trying to figure out a way to hide him on the defense side of the floor.

Another thing with Thomas: he’s in the final year of his current deal. And, I’m not sure if you heard but LeBron James has an opt-out in his contract for 2018-2019.

If this thing doesn’t work out for Cleveland this season — meaning they can’t get past Golden State, and heck, even Boston — it’s quite possible James could bolt and then the Cavaliers could be left without both Thomas and James for 2018-2019, essentially sending the team into rebuild mode. Although, having Brooklyn’s 2018 first round pick does help in that respect.

Of course, the Cavaliers would have Thomas’ Bird rights and could re-sign him to a max contract, but if James is out of the picture, does Cleveland really want to shell out that kind of cash for near 30-year-old point guard? Doubt it.

Crowder — a hard-nosed, plus wing defender — is under contract through 2020 at a bargain rate of $7 million per year. Zizic is signed to a rookie-level deal at an average of $1.8 million per year. 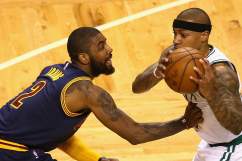