The Atlanta Falcons made sure young running back Devonta Freeman will be in town for the long haul on Wednesday. The team and Freeman agreed to a five-year, $41.25 million deal, which was reported by NFL Network’s Michael Silver.

The deal includes $17.3 million fully guaranteed and makes him the highest-paid running back in the NFL. Not only is his contract the largest in terms of total dollar amount, according to Spotrac, but it also features the highest average per year as well.

Let’s take a look at how Freeman’s deal stacks up against the other top running backs in the NFL, with numbers courtesy of Spotrac.

Freeman’s full contract size and average contract size ranks as the biggest in the league, as previously mentioned. He also comes in at No. 4 in total guaranteed money at signing with $17.3 million, behind Leonard Fournette, Ezekiel Elliott and LeSean McCoy.

McCoy received his deal back in 2015, and 45.63 percent of it is guaranteed, which comes in behind Freeman’s 53.33 percent. Even still, he has a larger guaranteed at signing of $18.25 million, but his practical guarantees are lower than Freeman’s. At age 29 and with multiple years left on his deal, this is the big one for McCoy, and he’s certainly earned it.

This one is tough to swallow right now, as Martin hasn’t performed like a top-tier running back in recent years. The Buccaneers are certainly hoping that they can get more from him in the coming seasons, but his deal also includes no dead money moving forward if they should release him. His $15 million guaranteed was given fully at signing.

Another tough contract to swallow, as Ivory is almost certainly going to be pushed out of the mix for any serious number of touches in Jacksonville. The team spent a high draft pick on Leonard Fournette, and he’ll likely be the man moving forward. This just makes the signing look even worse, as Ivory earned $10 million at signing and anytime the team releases him over the next two seasons will result in some dead cap. If he’s released in 2018 then it’s $3 million in dead money and in 2019 it would be $2 million in dead money.

The Jaguars have two of the top-five highest paid running backs in the NFL and Fournette’s contract is 100 percent guaranteed. This means that no matter what, he’s going to receive just over $27.15 million. Here’s to hoping the Jaguars landed a star in the 2017 NFL draft. Fournette’s deal, like all rookie deals, is really cut and dry, with very little question about how it’s laid out.

When the Texans signed Miller back in 2016 they were desperately looking for their future running back. And at age 26 with three years left on his deal, it seems like a pretty good signing. The Texans gave Miller a solid $14 million in guaranteed money, which is still even less than Martin received. With that said, he’ll also become a free agent before any name on this list other than McCoy. 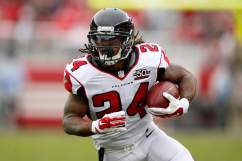