It’s been a head-scratching and probably very frustrating offseason for the Cleveland Cavaliers and superstar LeBron James. Earlier in the offseason, James seemingly took a shot at owner Dan Gilbert on Twitter after his decision not to bring back former general manager David Griffin. Unfortunately, that was just the starting point of all the drama.

Next up came the fact that fellow superstar Kyrie Irving had opted to request a trade to leave town, and as ESPN’s Brian Windhorst reported, the main reason was that he “no longer wants to play alongside LeBron James.”

The situation in Cleveland seems to get messier and messier as the days go on, and it’s gotten to a point where it almost seems like a foregone conclusion that 2017 could be James’ final year in Cleveland. And as a matter-of-fact, Chris Sheridan even reported that an NBA source stated that James will “100 percent” be leaving.

NBA source said today: "This will be LeBron's final season in Cleveland. He is 100 percent leaving. Relationship with owners beyond repair."

So, with the thought that James could very well leave the Cavaliers, let’s take a look at the potential odds of where he could land next summer, according to Bet Online.

Obviously, it seems that the expectation is largely for James to either remain with the Cavaliers, head to the Lakers or go to Boston. There are arguments for each place, but one of the biggest has to be that there has been speculation that James may want to head to Los Angeles to play.

As for the Celtics, James Stewart of CBS Boston pointed out that James has publicly made it known that he’s a fan of head coach Brad Stevens.

LeBron James on national TV said he likes Brad Stevens as a coach.

Maybe, LeBron would wave his no trade to play for a coach he likes. https://t.co/0zqMwyvVsi

The odds across the board are certainly intriguing, but for each time listed up high, including the Celtics, Rockets, Spurs, and Timberwolves, the teams would need to make some moves in order to free up cap space. There’s plenty of reason to believe that a trade could possibly be a realistic option, assuming that the Cavaliers believe there’s no way to salvage their relationship with James during the 2017-18 season.

Time will tell, but the rumors and hype of James heading elsewhere are only going to pick up steam as time rolls on. 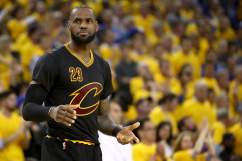 Potential Trades That Could Land the Celtics LeBron James

Read More
Basketball, Betting, Cleveland Cavaliers, LeBron James, Los Angeles Lakers, NBA, Odds
LeBron James is rumored to be leaving town after the 2017-18 season, and the odds project him possibly going to one of a few intriguing teams.