Getty LSU will have a short commute to New Orleans for their opener with BYU.

LSU and BYU fans had planned to kick off the season in Houston as one of the big neutral site contests this weekend. ESPN reports the game has been moved to New Orleans as the city of Houston recovers from Hurricane Harvey.

Here are the details from the ESPN press release:

Due to the devastating impact of Hurricane Harvey to Houston and the surrounding areas, the AdvoCare Texas Kickoff between BYU and LSU, originally scheduled to be played in NRG Stadium in Houston, has been relocated to the Mercedes-Benz Superdome in New Orleans, La. The game will still be played on Saturday, Sept. 2, at 9:30 p.m. ET/8:30 p.m. CT and televised on ESPN.

‘First and foremost, we are keeping the citizens of the Houston region, and the thousands of first responders, in our thoughts during this very difficult time,’ said Pete Derzis, ESPN senior vice president of college sports programming and events. ‘Over the last 72 hours, we have been in constant contact with all entities involved, including our partners at the Lone Star Sports & Entertainment, the SEC and both institutions. Ultimately, the decision was made to move forward with the relocation.’

Prior to the news, OddsShark had LSU was a 14.5 point favorite over BYU.

The Tigers will now have a massive home field advantage as New Orleans is a purple and gold city. Expect that line to move towards LSU with the new venue. The Superdome was the only option as Tulane has a home game. Yulman Stadium also would not have been able to accommodate the crowd expected for the game.

BYU is one of the few football teams to pay this past weekend. For LSU, all eyes are on Derrius Guice, who is one of the top running backs in the country.

College football fans continue to keep the city of Houston and the surrounding areas in our thoughts. 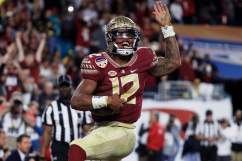