Follow along live as the Giants and Browns meet for preseason action.

Eli is sacked on the Giants’ first drive and go three-and-out. Myles Garrett gets double-teamed.

Browns pickup a few first downs, but JPP grabs a deflection for the red zone interception.

Both teams sluggish on offense. Neither can run the football. Kizer looks to be heading in for the Browns’ third possession.

Odell Beckham made a catch, then took a hard hit to the knee area. He immediately went down and went to the locker room.

Kizer entered the game late in the second quarter, and led the Browns on the first TD drive of the evening. It ended on a third-and-goal, when Kizer took a sneak through the middle.

David Njoku went down in the fourth quarter. He walked off on his own after being attended by trainers.

Browns win. Giants look sloppy. Both teams suffer injuries. Not a good look for the

Don't look now, but the Browns are 2-0 in preseason. pic.twitter.com/ii7PeC69f7

Preview
The Browns and Giants finish the second week of preseason play on Monday Night football.

Brock Osweiler is scheduled to start for the Browns, but he’s yet to be named the starter for the regular season. It’s been an open competition in Browns camp, and Osweiler has been competing with DeShone Kizer and Cody Kessler for the starting job. Kizer looks like the long-term solution, but it’s very likely that Osweiler starts the season under center.

The quarterback position is settled for the Giants, who are in their second year under head coach Ben McAdoo. The place to watch is the offensive line, where struggling tackle Ereck Flowers will be lineup up opposite first overall pick Myles Garrett.

Unlike their first preseason game, the Giants’ starters are all expected to play. Eli Manning didn’t even dress for the opener against Pittsburgh, but McAdoo told reporters that the starters will play well into the second quarter on Monday.

Kickoff is scheduled for 8 p.m. Eastern and can be seen nationally on ESPN. Keep this page refreshed for updates. 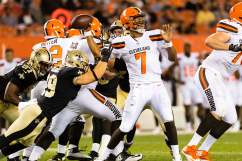 Browns QB Battle: Who Will Start Week One?