Rollie Massimino, the legendary Villanova University basketball coach, has died at age 82. Massimino, who orchestrated one of the biggest upsets in American sports history in 1985, was married to Mary Jane Massimino and had five children, and 17 grandchildren.

On August 29, Keiser University in West Palm Beach, Florida confirmed that Massimino was in hospice care. “We are inspired by the lives [Massimino] continues to touch locally and throughout the nation and thank you for joining Keiser University in supporting the Massimino family during this extremely difficult time,” the statement to The Florida Sun-Times read.

Less than a few hours later, the school announced that Massimino died Wednesday afternoon. As Philly.com notes, he was suffering from lung cancer.

“All of us in the Villanova Basketball family extend our deepest sympathies to Mrs. Mass, his wife of 59 years, his five children – Tom, Lee Ann, Michele, R.C. and Andrew – and his 17 grandchildren,” Villanova head coach Jay Wright said in a statement.

Massimino never retired, and was coaching Keiser University’s men’s basketball team before his death. The Hillside, New Jersey-born Massimino also coached high school teams before he started coaching college in 1969 at Stony Brook University. After a stint as an assistant at the University of Pennsylvania, Massimino joined Villanova in 1973.

He never coached in the NBA. He had an 816–462 record. He was inducted into the College Basketball Hall of Fame in 2013.

Here’s what you need to know about Massimino’s family. 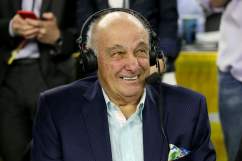 2. Granddaughter Kayla Sleece Played Lacrosse at the University of Louisville

Sports runs deep in the Massimino family. His granddaughter, Kayla Sleece played lacrosse at the University of Louisville. She attended Stone Bridge High School in Ashburn, Virginia. In a 2012 Loudon Times interview, Kayla said the Villanova basketball team is her favorite sports team.

“I’d have to say Villanova basketball because my grandfather coached there. My roots are kind of there and I always root for them when push comes to shove,” she said.

According to her LinkedIn profile, Kayla also earned a Master of Accounting from Fordham Gabelli School of Business. Today, she is an associate of PricewaterhouseCoopers.

3. Son Tom Massimino Was an Assistant Coach at UNLV During Massimino’s Tenure

Massimino’s tenure at the University of Las Vegas, Nevada wasn’t as heralded as his years at Villanova. Massimino was only at UNLV for two years before he took a buyout. As The Los Angeles Times reported in 1994, Massimino was given $350,000 annually for five years in the deal. He posted a 36-21 record while there. Despite the winning record, his relationship with the school soured because the team wasn’t doing as well as it did under Jerry Tarkanian.

While at UNLV, Massimino’s son Tom was an assistant coach. Sports Illustrated reported that UNLV paid Tom $83,000 to leave.

Today, Tom is the CEO of Harman Fitness LLC.

Rollie “R.C.” Massimino Jr. was also in basketball, playing at Villanova for his father. Fox Sports reports that R.C. is now the owner of a construction company in Newtown, Pennsylvania.

A 1991 Knight-Ridder News Service profile of Massimino noted that daughter Michele Massimino handled his personal appearances at the time.

The 28-year-old Roland Massimino played football at Hofstra University, then transferred to Johns Hopkins University after Hofstra dropped its football team. He graduated in 2011.

Villanova noted that Massimino had 17 grandchildren.

5. Massimino Was the Son of an Immigrant Shoemaker

Massimino was the son of an immigrant shoemaker, Philly.com notes. He was born in Hillside, New Jersey on November 13, 1934. He graduated from Hillside High School and earned degrees from Rutgers and the University of Vermont.

He never fully retired, even as he dealt with health concerns. In April 2016, he was unable to go to the NCAA title game because of a blood clot and kidney stones. His wife was also in poor health.

Massimino did make an attempt to retire, but it didn’t last before Keiser hired him.

“He tried it and kept saying, ‘I need something more to do,’” Mary Jane told the New York Times in November 2015. “He’s not one to sit around and read a book for more than 15 minutes.” She added, “He was going down to be a consultant. The next thing I knew, he was coaching.”