After each earning a win to start exhibition play last week, the Minnesota Vikings and Seattle Seahawks look to continue the preseason momentum when they meet at CenturyLink Field on Friday night.

Here’s a look at everything you need to know to watch the preseason Week 2 matchup:

TV Channel, Outside of Vikings and Seahawks Markets: NFL Network

Week 2 is a little better than Week 1 in terms of getting to watch starters play, but like most preseason games, it’s still largely about watching young players and rookies.

When the Vikings have the ball, this will be another good opportunity to watch Dalvin Cook, who may have the first-team backfield all to himself with Latavius Murray and Jerick McKinnon unlikely to play again. In his preseason debut against the Bills last week, the Florida State product racked up 42 yards (12 rushing, 30 receiving) on eight touches (four carries, four receptions), showing off a nice versatile skill set:

Cook will get a stiff test against Seattle’s first team defense, which didn’t look good during its lone series against the Chargers last week but is still as formidable as it gets in the NFL.

On the other side of the field, another rookie running back–though a far-less heralded one–will be worth watching.

Chris Carson, a seventh-round pick out of Oklahoma State, picked up a pair of short-yardage touchdowns in the Seahawks’ first preseason game and has even gotten some reps with the first team in practice. He’s still behind Eddie Lacy, Thomas Rawls and CJ Prosise on the depth chart, but he’s impressing, and it’s pretty clear he has surpassed Alex Collins at this point.

Another strong performance from Carson on Friday night, and he has a good chance to lock down a spot on the 53-man roster. 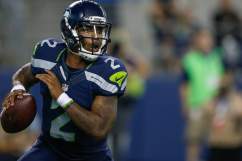 Seahawks Preseason Live Stream 2017: How to Watch Games Without Cable 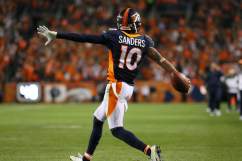 Read More
Minnesota Vikings, NFL, Seattle Seahawks
The Seahawks and Vikings meet for a preseason matchup on Friday night. Find out when and where to watch in Seattle, Minnesota and other markets.