Getty Sterling Shepard of the New York Giants evades a tackle by Glover Quin of the Detroit Lions.

Just a few days into training camp, there was officially cause for concern for the New York Giants</a.

Second-year wide receiver Sterling Shepard was carted off of the practice field in visible pain on Wednesday. He appeared to hurt his leg during a one-on-one drill between receivers and members of the Giants’ secondary, reporters at the practice said.

Reporters at the practice said team doctors were examining Shepard’s leg, and ESPN’s Jordan Raanan said Shepard looked to be in tears while being carted off by medical personnel.

Sterling Shepard was looked at on sideline. He's in serious pain. Taken off on cart. Apparently in tears. Not good. pic.twitter.com/AUFeOTBQFx

Bad News for the Giants: WR Sterling Shepard was taken off the field on a cart. Trainers were checking his right leg. He was tearing up. pic.twitter.com/lKNmhV0BTh

He was subsequently taken into the facility and was examined by team doctors.

Shepard was poised to be a starter once again this season alongside Odell Beckham Jr. and Brandon Marshall.

Before taking the practice field Wednesday, Shepard took the time to wish his mother a happy birthday on Instagram.

I hope your day is as beautiful as you are! Happy birthday mama!! I love you so much (Dj khaled voice)

The 24-year old was the No. 40 overall selection in the 2016 NFL Draft out of the University of Oklahoma. Playing mainly out of the slot position, he impressed many during his rookie season for the Giants. He was named a starting receiver right out of training camp and made an impact in the team’s first game against the Dallas Cowboys.

Shepard nabbed three Eli Manning passes for 43 yards and caught his first-career touchdown in the game, helping the Giants to a 20-19 victory against the division-rival Cowboys.

Shepard finished the season with 65 receptions for 683 yards and 8 receiving touchdowns and was named to the Pro Football Writers Association’s All-Rookie Team. 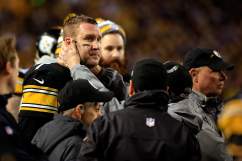 A Study of Former NFL Players’ Brains Found 99% Had CTE