Hailed as the world’s fastest man for the better part of the last decade, Usain Bolt is ready to write the final chapter of his legacy at the 2017 IAAF World Championships in London.

At the Olympic Stadium, the same place he captured three gold medals at the 2012 Olympics, Bolt is scheduled to compete in the 100m and the 4x100m relay before calling it quits on what has been the most decorated sprinting career of all-time.

First up is the 100m, which is expected to be the final major individual race of his career. Here’s everything you need to know to watch:

TV Coverage, Other Countries: You can click here for a list of TV broadcasters from around the world

A win in the 100m final on Saturday night would be the 14th World Championships medal and 12th gold for Bolt. In 12 sprinting events over the last four Worlds, his only loss came when he was disqualified on a false start in the 100m final in Daegu in 2011.

His biggest competition in 2017 comes in the form of two Americans: Christian Coleman and Justin Gatlin

The former, who just finished his junior year at Tennessee, owns the world’s fastest time this year when he clocked a 9.82 at the NCAA Championships, while the latter, who has long played second-fiddle behind Bolt’s long run of dominance, topped Coleman at the USA Track & Field Outdoor Championships in June.

Bolt, meanwhile, comes in with less certain form. His best time in 2017–9.95 set in Monaco in July–is just seventh fastest in the world.

“I’m the underdog, for some reason,” said Bolt. “That’s what I keep reading. That’s what my team keeps telling me… I’ve got to prove myself once more.”

Alas, we’ve seen this show before. There were question marks surrounding Bolt prior to both the 2015 World Champions and the 2016 Rio Olympics, and both times he walked away with three gold medals. He hits another gear when the brights are lightest, and until he’s beaten–or until he retires–he can’t be considered anything other than the favorite, especially in an individual event.

Canada’s Andre de Grasse, who ran a wind-aided 9.69 earlier this year, will miss the Worlds due to a hamstring injury. 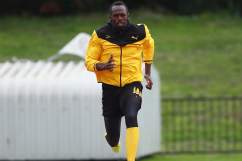