Watch video (above) of the Floyd Mayweather vs. Conor McGregor post-fight press conference.

The fight between Mayweather (50-1) and McGregor, who made his professional boxing debut, ended by TKO in the 10th round. Saturday’s fight at the T-Mobile Arena in Las Vegas took place before 14,623 fans.

Mayweather improved his record to 50-0 with 27 knockouts and said after the fight he would return to retirement.

With the victory, Mayweather surpassed the hallowed 49-0 mark that great heavyweight champion Rocky Marciano retired with, according to ESPN.

“A win is a win, no matter how you get it,” said Mayweather, who said during the buildup that he would consider it a failure if he didn’t score a knockout. “Rocky Marciano is a legend, and I look forward to going into the Hall of Fame one day.”

McGregor, a 29-year-old southpaw, went after Mayweather hard in the first few rounds, but tired as the fight went on. After the fight, McGregor gave Mayweather his due.

McGregor did say he was a bit upset that the fight was stopped when it was.

“I’ve been strangled on live TV and came back,” McGregor said, referring to his submission loss and decision victory over Nate Diaz in the UFC in 2016. “When you’re in here in the squared circle, everything is different. Let the man put me down. That’s fatigue, that’s not damage. Where was the final two rounds? Let me walk back to my corner and compose myself.” 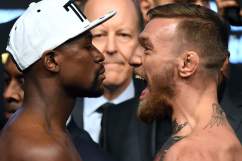