Getty Ezekiel Elliott was granted an injunction from his suspension.

Just days after he lost his appeal, Dallas Cowboys running back Ezekiel Elliott found out Friday he will in all likelihood be able to play this season despite a six-game suspension. Elliot won an injunction out of a Texas court, barring the NFL’s imposed suspension.

Judge Amos L. Mazzant of the U.S. District Court for the Eastern District of Texas said in his ruling: “The court finds that Elliott did not receive a fundamentally fair hearing, necessitating the preliminary injunction.”

“The court held a hearing on the motion, at which the NFL presented its arguments, and both parties filed supplemental briefing after the hearing,” Mazzant wrote. “Considering the procedural history in the case, the court proceeds on a preliminary injunction analysis.”

Read the full injunction in the court document below:

The temporary injunction was initially granted because Elliott and his attorney’s accused the NFL of withholding evidence from the NFL Players Association. According to lawyer Daniel Wallach, the order was granted because the arbitrator in the appeal excluded notes from Elliott’s accuser’s interviews with the NFL.

It was all over the moment Henderson excluded the notes of the accuser's interviews with the NFL. Judge's comments on Tuesday was no bluff.

“Henderson denied access to certain procedural requirements, which were necessary to be able to present all relevant evidence at the hearing,” Mazzant wrote. “Henderson breached the CBA (Collective Bargaining Agreement).”

Next, the ball is in the NFL’s court. The league will have to file a notice of appeal, which is expected. It could also ask the court to grant an emergency stay of Mazzant’s order, which would put Elliott’s suspension back into question. As of now, though, Elliott is able to play this season.

The situation is similar to the one the NFL had against New England Patriots quarterback Tom Brady for his role in “Deflategate.” Brady was initially suspended for the first four games of the 2015-16 season, but a court vacated the suspension. However, Brady accepted his suspension the next season.

On Tuesday, Elliott went before Mazzant to plead his case. During the proceedings, he found out that the arbitrator in his appeal, Harold Henderson, upheld his six-game ban, ruling in the favor of the NFL.

Elliott’s attorneys released a statement after the Tuesday’s ruling, saying they were “extremely disappointed” with it because the evidence “clearly demonstrated that Mr. Elliott was the victim of a conspiracy orchestrated by the National Football League and its officers.”

Read below for the order granting Elliott’s temporary restraining order:

The domestic abuse allegations against Elliott come from a woman who describes herself as his ex-girlfriend. She brought forth photos that show brusied on her knee, arms and neck and accused Elliott abused her for months.

“It finally got out of control to where I was picked up and thrown across the room by my arms,” she said in a caption of the photos. “Thrown into walls. Being choked to where I have to gasp for breath. Bruised everywhere, mentally and physically abused.”

As said at a press release from the city of Columbus, charges would not be pressed on Elliott for the five alleged incidents.

“This is primarily due to conflicting and inconsistent information across all incidents resulting in concern regarding the sufficiency of the evidence to support the filing of criminal charges,” the press release said.

Last year during Elliott’s rookie season, he led the NFL in rushing with 1,631 yards and scored 16 touchdowns. 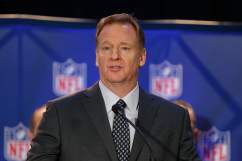 Roger Goodell’s Net Worth: 5 Fast Facts You Need to Know