Of course, performances from Julio Jones (WR24), Mike Evans (WR33) and Alshon Jeffery (WR46) also served as reminders that there is still plenty of week-to-week volatility when it comes to the position.

Predicting the position is always difficult, but here’s an early look at some not-so-obvious Week 4 wide receivers to start, and others to stay away from. You can also read here for running backs.

Tyrell Williams, SD (vs. PHI): Williams has disappointed thus far with weekly WR finishes of 37th, 43rd and 79th. Still, he’s second on the team in targets with 18, he has played 93.7 percent of the snaps, and he’s getting targeted deep down field (average depth of target of 12.6 yards). It’s only a matter of time before he breaks out with a big game, and this is a good spot for that happen, as the Eagles have given up four Top-30 WR performances through three weeks, including a pair of Top-10 performances against the Giants last week.

Devante Parker, MIA (vs. NO in London): A three-point underdog in a game that has the highest over/under (50) of the week, the Dolphins figure to end up throwing a ton against a Saints defense that is allowing 9.4 yards per attempt despite getting to play a struggling Cam Newton last week. Parker, meanwhile, has racked up 19 targets, 12 receptions, 161 yards and a score through just two games, establishing himself as Jay Cutler’s clear No. 1 downfield option. Throw it all together, and it’s the perfect storm for Parker being a Top-10 WR option in Week 4.

Paul Richardson, SEA (vs. IND): It’s hard to trust anyone on this offense with the way the offensive line has been trying to block, but the Seahawks showed signs of life in the second half against the Titans, finding the end zone three times in six possessions. Now, they’re back at home and playing in prime-time–where they’re typically dominant–and they’re up against a Colts defense that is allowing 7.9 yards per pass attempt. Enter Richardson, who has tallied 19 targets through three games, has scored in each of the last two and could see an increased role with Doug Baldwin dealing with a groin injury.

Michael Crabtree, OAK (at DEN): After catching one of three targets for seven yards against Washington on Sunday night, Crabtree gets rewarded with a matchup at Denver against one of the best secondaries in the NFL. The Broncos have held Keenan Allen, Travis Benjamin, Tyrell Williams and Dez Bryant each to under 60 yards this year, and they did a fantastic job of limiting Crabtree last season, holding him to just seven catches and 74 yards in two games. Typically a solid WR2, Crabtree is more of a low-end WR3 option this week.

Martavis Bryant, PIT (at BAL): Bryant currently has an average depth of target of 22.4 yards, which is highest among players with more than two targets. This means that he can produce a big fantasy performance with just one play, but it also makes him highly volatile, as we’ve seen through three games with weekly WR finishes of 75th, 12th and 69th. The two bad ones have come on the road, and that’s where Pittsburgh will be in Week 4, where they face a Ravens defense that has given up just one Top-25 WR performance on the year and will look to make this a physical division battle with limited big plays. Again, Bryant has the game to break one at any given time, but I’d rather go with a safer option due to matchup.

Terrelle Pryor, WAS (at KC): Kirk Cousins threw for 365 yards and three touchdowns in Week 3, and Pryor, the presumed No. 1 receiver, finished with four targets, two receptions and 19 yards. He has now finished as the WR27, WR73 and WR74 the first three weeks of the season, showing very little involvement in the offense. Even against a Chiefs defense that has allowed a Top-24 WR performance in each of the first three weeks, Pryor can’t be trusted. 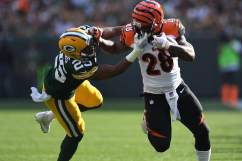 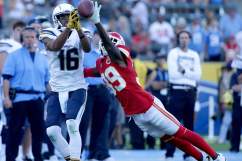 Read More
Fantasy Football, NFL
Looking for some help filling out your Week 4 fantasy football lineup? Here's a look at some wide receivers to start, and some to leave on your bench.