Getty Jim Bob Cooter looking on during a game against the Green Bay Packers on January 1, 2017.

Perhaps best known for having a wacky name, Detroit Lions offensive coordinator Jim Bob Cooter has started to carve out a name for himself in the NFL by helping Matthew Stafford have arguably the best three years of his career on his way to becoming the NFL’s highest paid player.

Jim Bob Cooter joined the Lions in 2014 as a quarterbacks coach and quickly climbed the ranks to the offensive coordinator spot. Cooter now looks to be one of the hot names to become a head coach going into next season, barring a complete meltdown by the Lions this season.

Here’s everything you need to know about Jim Bob Cooter.

1. Cooter Has Been Credited With Elevating Matthew Stafford’s Performance

Before Cooter’s arrival in 2014, the Lions’ performance with Matthew Stafford was average at best. Stafford joined the team as a rookie quarterback after the Detroit Lions made history by becoming the first team in NFL history to go 0-16.

Under Stafford but before Cooter, the Lions amassed 31 wins and 51 losses with one playoff appearance. Stafford was hurt for significant amount of time during that run but it just goes to show the Lions have struggled with him under center.

Cooter joined the Lions in 2014 as a quarterbacks coach and Stafford ended up becoming the first Lions quarterback to play in the Pro Bowl since 1972 after he took Peyton Manning’s spot due to injury. Cooter was elevated to offensive coordinator in 2015 as part of a midseason change and he led the Lions to a 6-2 record down the stretch to clinch a playoff spot. While Cooter has been a member of the Lions organization, the team has managed 27 wins and 21 losses (not counting the 2017 season) to go along with two playoff appearances.

2. Before the Lions, Cooter Spent Time With the Broncos, Chiefs and Colts in the NFL

Although Cooter is perhaps best known with his stint with the Lions, he has been an assistant in the NFL since 2009. Before that, he was a graduate assistant at Tennessee, his alma mater.

From 2009-2011, Cooter was on the Colts’ staff. During that run, the Colts appeared in Super Bowl XLIV against the New Orleans Saints. He left the Colts and joined the Chiefs during the 2012 season with the position of Offensive Quality Control.

After the lone season with the Chiefs, Cooter was reunited with quarterback Peyton Manning in 2013 as an offensive assistant with the Denver Broncos. The Broncos went to the Super Bowl that year only to be blown out by the Seattle Seahawks 43-8.

When Cooter left the Broncos to join the Lions, Manning was reportedly upset to lose Cooter as he was a valued part of his preparation.

When the #Lions hired Jim Bob Cooter away from the #Broncos, Peyton Manning was very upset. He was a valued part of his preparation.

3. Cooter Was Name Dropped in a Recent Episode of HBO’s Ballers

HBO’s comedy-drama series Ballers starring Dwayne Johnson has been airing since 2015. The show itself takes place in its own fictionalized NFL as it features both current and fictional NFL players.

In a recent episode of the show, Larry Siefert, the fictional Miami Dolphins GM played Dule Hill, considered bringing in Jim Bob Cooter as the new head coach of the Dolphins.

“If Stafford hadn’t gotten hurt, the Lions would have made some noise in the playoffs,” he says while pointing to a picture of Cooter on the whiteboard. Although Cooter didn’t end up getting the job, he did receive some texts from friends in real life according to the Detroit Free Press.

“It’s surprising,” Cooter told the Detroit Free Press. “It was surprising. Something comes out of nowhere like that, take it in stride. My buddies are giving me a hard time about it, but that’s OK.”

4. Cooter Has Been Arrested Twice But No Record of Those Arrests Remain

It appears Jim Bob Cooter got into some trouble during his Tennessee days. According to the Associated Press and The Tennessean (via the Detroit Free Press), Cooter was arrested and charged with aggravated burglary in 2009 and with drunken-driving in 2006.

In 2009, a woman said Cooter climbed through an apartment window, stripped down to his underwear and then climbed into bed with her. She called police, who found him in her bed and arrested him on an aggravated burglary charge. He was released the following day on a $10,000 bond.

Knoxville police spokeman Darrell DeBusk said at the time there was no indication Cooter knew who the woman was. In 2015, DeBusk said there isn’t an arrest record for Cooter.

“What I may have said with regard to an incident years ago does not mean that I can confirm that record again,” he told the Detroit Free Press. “There’s no record. There’s nothing.”

In June 2006, Cooter was arrested on suspicion of drunken driving after his car crossed the center line several times and drove on the wrong side of the road. Police at the time said Cooter failed three sobriety tests and was charged with his first offense of driving under the influence. He was taken to University of Tennessee Police Department, where he registered a 0.19 on the breathalyzer test.

The Detroit Free Press reports that neither case exists in the records of the Criminal Court for Knox County. This means there is no proof at the courthouse on whether the charges were dropped, dismissed or handled some other way.

The Detroit Lions have a bad streak going right now regarding the running game. You have to go all the way back to the 2013 season on Thanksgiving to find the last time a Detroit Lions player recording 100 yards rushing. Reggie Bush put up 117 yards against the Packers that day and no player has crossed the threshold since.

In a Q&A with the Detroit News, Cooter says losing both Ameer Abdullah and Theo Riddick last year forced the team to adjust its playstyle.

“Huge to have those guys back,” Cooter said. “Both are really good players, in their own right. Both do different things really well, have different strengths and weaknesses. Any time you lose guys like that, you adjust and do what whoever else is in there does best.”

Despite having them back, Cooter says he plans to use multiple players at running back but he expects better performances from the team all around.

“We’re still going to play multiple guys at that position this year, but to have those guys back is big for us. We’re going to call a bunch of runs and I expect them to work at a higher clip, with higher efficiency, than they did last year.”

The Detroit Lions threw the ball 64.60 percent of the time last season, with only the Green Bay Packers and Baltimore Ravens throwing the ball more. 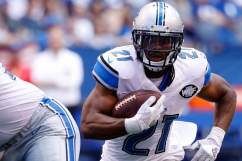 Ameer Abdullah Fantasy Football 2017: When to Draft the Lions RB