GettyMichigan is wearing their all-maize uniforms for just the second time in school history.

The University of Michigan Wolverines are taking on the Florida Gators today kicking off the season for both teams. In an unusual sight, neither school is wearing the traditional road whites seen with most schools. The Gators went for an all blue look while the Wolverines went for the much rarer all maize look.

This is just the second time in school history that Michigan has opted for this look with the last time coming in 1928 against Navy. The jerseys were provided by the Jordan Brand and are in celebration of the university’s bicentennial and in honor of the 150th anniversary of the school’s colors. The reason Michigan wore these jerseys in the first place back in 1928 is because Navy refused to wear any other color other than their traditional blue. This forced Michigan to don the all-maize look that were compared to canaries. The result of that game was a 6-6 tie and the jerseys were retired.

Since the game is being held at the neutral site in Texas, one of the teams had to take on the role of designated road team although both teams are technically on the road. SB Nation reported that the road team, in this case, Michigan, had to wear a “light color” which is why we’re seeing the maize look today. You can read the excerpt stating this rule right here. It’s not yet known whether Michigan will put these jerseys back out during the season but we can confirm the players are a fan of them.

Michigan head coach Jim Harbaugh suggested the idea before the 2016 season according to then-Michigan cornerback Jourdan Lewis. Michigan athletic director Warde Manuel said he is a fan of the jerseys and said it’s completely up to Harbaugh on what jerseys the team wears.

“With all the different uniforms that teams wear nowadays, I don’t know if there’s a traditional standard across the board anymore,” Manuel told the Detroit News. “If Jim decides to wear the alternate uniform, the team will look great and they will go out and play well like they will play in our more traditional uniforms.

“Uniforms have nothing to do with the way that we play. I’ve worn uniforms of different sorts, and I’ve had different results, more winning than losing, thankfully, but uniforms don’t make you win or lose. They go out in the alternate uniforms and win, they’ll be the favorite uniforms, right? You don’t win, people don’t like them. I want Jim, as well as all my coaches, to have the ability to make the selection of the uniforms they believe they need to make and the look as we roll out.”

Fans are able to purchase the all-maize jerseys right here.

GettyFlorida is going for an all-blue look in today’s game.

The Florida Gators are wearing all-blue uniforms, gloves, cleats, socks and wristbands based on the Nike “Color Rush” jerseys. The university called it a “subtle yet bold change” from its traditional look. The Color Rush jerseys are seen quite often in the NFL as alternate jerseys for many teams. 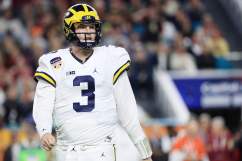 Michigan Football Live Stream: How to Watch Games Without Cable in 2017