After months of speculation and a summer full of rumors, the New York Knicks have finally traded 10-time All Star Carmelo Anthony to the Oklahoma City Thunder, according to ESPN’s Adrian Wojnarowski.

Anthony waived his no-trade clause in order to join Russell Westbrook, Paul George, and the Thunder.

New York has agreed to a deal to send Carmelo Anthony to OKC for Enes Kanter, Doug McDermott and a draft pick, league sources tell ESPN.

The Knicks will acquire center Enes Kanter, forward Doug McDermott, and a second-round pick in 2018 for Anthony.

As Frank Isola of the New York Daily News notes, the second-round pick is via the Chicago Bulls — who are in rebuilding mode.

The pick the Knicks get is a second round pick via Chicago, according to a source. So it should be a high pick…maybe as high as 31.

Anthony, who for most of last season was steadfast in his desire to stay with his hometown Knicks, recently made clear he would waive his no-trade clause to accept a deal to the Houston Rockets to join long time friend Chris Paul and superstar James Harden.

On Friday night, multiple reports surfaced that Anthony had expanded his list of teams that he would accept a trade to — the Cleveland Cavaliers and the Oklahoma City Thunder.

With media day and training camp on the horizon following the weekend, it became evident the Knicks and Anthony’s camp needed to make a deal in order to placate both sides.

General manager Scott Perry told reporters yesterday, “At the end of the day, what we set out and what we said [in July was], if there was something there that made sense both for him and the Knicks organization, then we would strongly consider it.”

The Knicks are in rebuilding mode and Anthony, 33, is in need of a competitive, playoff-caliber team at this stage of his career. Further, having a disgruntled superstar surrounding young developing talent — Kristaps Porzingis and Frank Ntilikina in particular — is not a good look.

Anthony spent six full seasons with New York, averaging 24.6 ppg, 7 rpg, and 3.2 apg. He was traded to the Knicks from the Denver Nuggets midway through the 2010-2011 campaign for Raymond Felton, Danilo Gallinari, Wilson Chandler, Timofey Mozgov, a first round pick, a second round pick, and the right to swap first round picks in 2016.

Let’s take a look at the Knicks roster as it is currently constructed: 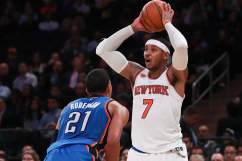