Sam Darnold is one of the favorites to be the top pick in the 2018 NFL Draft.

For many fans, college football Saturdays are a way to see who the top prospects are for the upcoming NFL Draft. The 2018 NFL Draft kicks off on April 28, but it is never too early to take a look at the top prospects.

Given that 2018 is being dubbed by many as the year of the quarterback, we reached out to ESPN’s Kirk Herbstreit to assess the top quarterbacks. You can click here to read the full interview, but we’ll share some of the highlights of his thoughts on the quarterbacks.

Sam Darnold, Josh Rosen and Josh Allen are considered the top NFL quarterback prospects heading into the start of the season. Mason Rudolph and Lamar Jackson could also work themselves into the conversation with a good season.

At this point, Darnold is the player Herbstreit prefers.

“…[Sam Darnold is] more my type of quarterback,” Herbstreit said. “Yeah, he can sit in the pocket and he’s big at 6’4″, 225. But he has some athletic ability where he can move around, and get away from trouble while still making plays. He’s as calm a guy as I have ever seen play this position. He’s a flat-liner emotionally, and has the propensity for making plays. It does not have to work perfect for him to be able to find a way to execute an offense.”

Herbstreit reminded the fans not to count out Rosen just because he has had an inconsistent college career.

“Josh Rosen was the guy that came out of high school and everyone thought, ‘Okay, three years [off to the NFL]. He is brought down from the NFL gods to be an NFL quarterback on Sunday,’” Herbstreit said. “He’s 6’4″ and about 212 pounds. He is what you like to see on Sundays, as far as sitting in the pocket, reading coverages and distributing the football. He can become a very hot name if he starts to play well, and their team starts to win. He could be the name everyone falls in love with just because of his skill set.”

While Allen has the physical tools to be an NFL quarterback, he will likely be more scrutinized than the other signal callers given Wyoming’s level of competition.

“I think Josh Allen is more of a guy you’re going to want to study and examine,” Herbstreit said. “Based on the level of competition, what talent he has physically. Is he the number one quarterback? There are some people right now who say he is going to be the number one pick. Let’s see how these guys all play this year. As you know better than anybody, they get dissected between January and the draft in late April, early May. Their personal workouts, and their work at the Combine, things like that.”

The following is our first look at the entire first round of the 2018 draft. The order is based on the Super Bowl odds courtesy of OddsShark. We also factored in picks that have been traded. 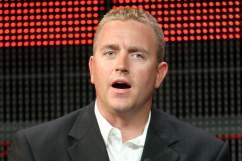