In the last few days, President Donald Trump has turned his attention to professional sports taking on the NFL and Golden State Warriors. According to FOX News, Trump noted at a recent Alabama rally that NFL players who kneel during the national anthem should be fired.

“Wouldn’t you love to see one of these NFL owners, when somebody disrespects our flag, to say ‘get that son of a bitch off the field right now – he’s fired,'” Trump said of NFL players.

The comments were praised by Donald Trump Jr.

Love this: @realDonaldTrump on NFL players disrespecting our flag/anthem: "get that son of a bitch off the field right now – YOU'RE FIRED!"

Trump took to Twitter to double down on his comments just hours before the majority of NFL games kicked off on Sunday.

If NFL fans refuse to go to games until players stop disrespecting our Flag & Country, you will see change take place fast. Fire or suspend! NFL attendance and ratings are WAY DOWN. Boring games yes, but many stay away because they love our country. League should back U.S.

NFL players responded in a big way with a variety of actions. The Pittsburgh Steelers refused to take the field during the national anthem. The Seattle Seahawks and Tennessee Titans later stayed in their locker rooms as well. Some teams locked arms before the game, a move that was started last season by the Seahawks.

The Ravens Benjamin Watson spoke to The Baltimore Sun about Trump’s demands.

The Ravens-Jaguars were the first game of the day, kicking off in London at 9:30 a.m. Eastern.

After several teams locked arms during the anthem, Trump tweeted this was an appropriate response.

Great solidarity for our National Anthem and for our Country. Standing with locked arms is good, kneeling is not acceptable. Bad ratings!

Trump went on to formally invite the Pittsburgh Penguins to the White House, words that could be seen as a veiled swipe at the Warriors after the president rescinded his White House invitation to the team.

In keeping with a theme of declining NFL ratings, Trump retweeted this tweet encouraging fans to boycott the league if protests continued.

You can boycott our anthem

WE CAN BOYCOTT YOU! #NFL #MAGA pic.twitter.com/ryYzZnXjXE

Trump later touched on those in the service as reason that NFL players should be standing for the anthem.

I wonder what this BRAVE American would give to stand on his OWN two legs just ONCE MORE for our #Anthem? #MAGA #NFL pic.twitter.com/3AVqnAlu3F

Courageous Patriots have fought and died for our great American Flag — we MUST honor and respect it! MAKE AMERICA GREAT AGAIN!

Finally, Trump again encouraged fans not to support players who do not stand for the anthem.

Sports fans should never condone players that do not stand proud for their National Anthem or their Country. NFL should change policy! 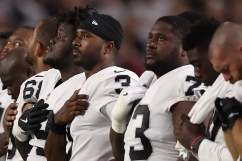