Getty Blake O'Neill, Michigan's punter who flubbed the punt that cost Michigan the victory against Michigan State in 2015.

The final 10 seconds of this game will live in infamy for both Michigan and Michigan State fans for completely different reasons. Michigan punter Blake O’Neill mishandled the snap and fumbled it away and then attempted to toss it away. Michigan State recovered the botched snap and returned it for a touchdown as time expired to capture victory from the jaws of defeat.

Looking back on it, it’s easy to say he should’ve fallen on the ball or pretty much did anything other than what he did. Of course, hindsight is 20-20 and history’s history.

Michigan State Beats Michigan On Punter's Fumble On Last Play Of The Game (HD)All Michigan had to do was get this punt off and it would hand Michigan State its first lost of the season. Instead, an unfathomable play handed the Wolverines the 27-23 loss. No. 7 Michigan State stunned No. 12 Michigan in Ann Arbor as time expired, forcing a fumble by the Wolverines’ punter and returning it for a touchdown. With the Wolverines up 23–21 and 10 seconds left, Blake O’Neill, punting away on a play that looked like it would seal the game, fumbled the snap and then attempted to get rid of the ball. As he tried to kick it away, Michigan State’s special teams arrived and applied heavy pressure, forcing him to lose the ball. Sophomore Jalen Watts-Jackson, a reserve defensive back, came up with the fumble and took it back all the way to win the game.2015-10-17T23:35:27.000Z

O’Neill ended up receiving death threats as a result of this missed opportunity. He did handle the situation well but unsurprisingly, it did eat at him.

“Definitely. I don’t think you want to suppress that,” he told ESPN. “Could I have spent a bit more time understanding what happens in a situation where you drop the ball? For sure. You can look at this every which way from Sunday. Trust me. I have.”

Two years later, O’Neill still hears about the incident but he says he has found a “silver lining” through all of it.

“You do find a silver lining,” he told the Detroit News. “My prevailing memory from that time was the sheer outpouring of positive messages and support. Emails, letters, kids at school drawing pictures for me. That’s great as a player, especially a foreign player who was in for a year, to receive that.”

O’Neill was a graduate transfer when he became the punter for the 2015 Wolverines. He has since obtained his master’s degree at Michigan but on top of that, he says he has built unforgettable relationships.

“It was a whirlwind experience,” O’Neill, an Australia native, told the Detroit News about his time with Michigan. “To learn the process with Bax (coach John Baxter) and to play under a coach like (Jim) Harbaugh was an incredible experience. To be in a town like Ann Arbor, I made some lifelong friends and got my masters in sports management. It ticked a lot of boxes.”

GettyMichigan State scoring as time expires against Michigan in 2015.

Today, O’Neill is building a career in real estate development. He lived in Florida during 2016 and said he would often see the play as he watched ESPN. In 2017, you can find O’Neill back living in Australia. Outside of his real estate career, he also coaches at Prokick on Wednesdays and Fridays. Prokick is an Australian punting program that helps Australians transition into the American style of football.

“I try to impress it on every guy there,” he told Bleacher Report. “You have to get the ball off in 1.2 or 1.4 seconds. I know how a microsecond with a misplaced hand can change everything.” 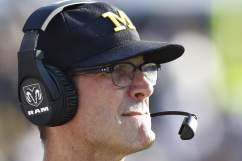 Read More
College Football, Michigan
Find out what Blake O'Neill is up to today.