Getty Colin Kaepernick of the San Francisco 49ers looks on from the sidelines during the second half against the Atlanta Falcons at the Georgia Dome on December 18, 2016 in Atlanta, Georgia.

CBS News reported that Colin Kaepernick will stand for the National Anthem if he’s signed by an NFL team, but the reporter who first revealed that detail, Jason La Canfora, has now issued a clarification and says he didn’t even ask Kaepernick about the topic.

Furthermore, Kaepernick retweeted a series of tweets questioning and trashing the CBS report. He also tweeted a Winston Churchill quote that says, “A lie gets halfway around the world before the truth has a chance to get its pants on. Winston S. Churchill.”

A lie gets halfway around the world before the truth has a chance to get its pants on.

Here are some of the retweets on Kaepernick’s page:

That’s just for starters. Kaepernick also tweeted a string of other tweets criticizing the report, although he never specifically said what he will do during the National Anthem if a team signs him. In March, ESPN reporter Adam Schefter reported: “Quarterback Colin Kaepernick will stand during the national anthem next season, sources told ESPN on Thursday. Kaepernick no longer wants his method of protest to detract from the positive change he believes has been created.” However, Schefter made those claims based on anonymous sources, not speaking directly with Kaepernick.

Here’s the video of the La Canfora talking about the more recent claim before he clarified it. He spoke about Kaepernick living in New York and training in New Jersey in the hopes of getting signed by a team.

“He’s not planning on kneeling. He’s going to donate all his jersey sales. He’s planning on standing for the anthem if given the opportunity,” La Canfora said on video.

However, after reports exploded quoting the CBS account, La Canfora took to Twitter to reveal that he had not spoken to Kaepernick about the question. After he did so, the Associated Press withdrew its story that was based on the La Canfora claim.

I know @Kaepernick7 is fully committed to playing football and helping those in need. What he would do during the Anthem I do not know

Colin would have to address any future demonstrations. I didn't ask him if he would sit or stand. Our chat primarily about his will to play

“Wanted to clarify one thing regarding @Kaepernick7. When I was asked about his whether or not he would sit or stand for anthem …” La Canfora wrote after the report about Kaepernick standing spread like wildfire.

“Standing for Anthem wasn’t something that I spoke to Colin about sat. I relayed what had been reported about him standing in the future…” (Note: La Canfora never explained where the claim had been reported before, but presumably it was the ESPN report.)

“Reports about @Kaepernick7 standing for anthem had not been refuted. However, I cant say if they are true or not. Colin and I didn’t discuss.”

“Colin would have to address any future demonstrations. I didn’t ask him if he would sit or stand. Our chat primarily about his will to play.”

“I know @Kaepernick7 is fully committed to playing football and helping those in need. What he would do during the Anthem I do not know.”

The report originated on CBS. The Sporting News had previously reported, “An interesting report about Colin Kaepernick from CBS NFL insider Jason La Canfora on Sunday’s ‘The NFL Today’: Kaepernick will stand for the national anthem if an NFL team signs him this season.”

The report also ricocheted throughout other news sites, and was shared widely on social media, but the bottom line is that Colin Kaepernick never told the reporter that he will stand for the National Anthem. Despite the clarification, some people on Twitter harshly criticized Kaepernick without apparently releasing the claim had been withdrawn. 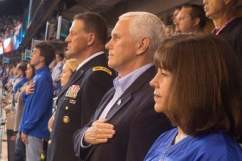