Getty Kenyan Drake is the Dolphins running back to own in fantasy after Jay Ajayi was traded.

The Dolphins have traded star running back Jay Ajayi to the Eagles for a fourth-round pick. This opens up a new starting running back opportunity, and fantasy owners are scrambling to know what Dolphins running back to pick up given the scarcity at the position.

While it will likely take a game or two to fully play out, Kenyan Drake is the favorite to win the job. Damien Williams is expected to be in the mix as well, but the Dolphins did not use a relatively high 2016 draft pick on Drake not to give him every opportunity to win the job.

It is important to note Damien Williams is listed second behind Ajayi on the Dolphins current depth chart. Kenyan Drake is listed third with Senorise Perry in fourth. Williams above Drake likely has a lot do with the role Williams played as a backup, but I do not expect that to limit Drake’s opportunity.

While nothing is guaranteed until we see how the Dolphins divide the carries, I’d make Drake a priority in my waiver claims. Keep in mind Ajayi struggled behind a suspect Dolphins offensive line, so the ceiling for any Dolphins running back is not great. Drake could have more of an opportunity to thrive given his elite-level speed. Drake ran a 4.45 in the 40-yard-dash at the NFL Combine, and plays even quicker than his time reflects.

ESPN’s Mike Clay notes he expects both running backs to be active, but Drake to move into the starting role.

Wow. Have to see what happens with Blount but what a get … and suddenly Kenyan Drake the Dolphins starter https://t.co/GVeokch4Tj

Kenyan Drake and Damien Williams will both be very busy, with Williams very good in passing situations

Drake has been used sparingly in Miami so far this season. Prior to the trade, Drake had 10 carries for 15 yards. During his rookie season, Drake had 33 carries for 179 yards along with nine receptions for 46 yards.

Despite being higher on the depth chart, Williams usage has not been much higher. Williams has 12 carries for 32 yards this season in addition to eight receptions for 50 yards.

As Drake displayed at Alabama, he has the ability to be involved in both the run and pass game. In his four college football seasons, Drake rushed for 1,495 yards and had 570 receiving yards. Drake finished with 22 total touchdowns.

Keep in mind Drake played behind a litany of great running backs at Alabama including Derrick Henry, and his numbers reflect his limited workload. Drake was used more as a change-of-pace back with the Crimson Tide.

Here’s a look at some of Drake’s best highlights from his time at Alabama.
Kenyan Drake – True Resilience –Kenyan Drake has done great things for the tide . Along the way there have been ups and down for him but he continues press on and get better . Roll Tide !! ( 1st song )Music By Audiomachine -Reign of Glory ( 2nd song )Music By SimBi J -Collapsing ***I DO NOT OWN CLIPS AND MUSIC*** All rights go to Alabama, CBS& its broadcasters, ESPN, xosdigitalsports ,and ABC Sports. I do not own the music or the footage used in this video. No copyright infringement intended. I do not gain any profit from my videos. For entertainment purposes only. This just something I love to do thanks for watching everyone.2015-11-25T21:14:05.000Z 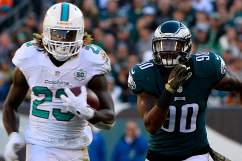 Read More
Fantasy Football, Football, NFL
Should you pick up Kenyan Drake or Damien Williams in fantasy? We explore the Dolphins depth chart, and what running back we expect to be fantasy relevant.