Giannina Elizabeth Cimetta Sandoval is the wife of Houston Astros second baseman, Jose Altuve. She goes by the shorter name “Nina.” Mrs. Altuve is extremely private and does not have any public social media accounts.

She has been spending the past several weeks supporting her husband in the postseason. On November 1, the Astros beat the Los Angeles Dodgers 5-1 in Game 7 of the World Series. The win comes just days after the Altuves celebrated their daughter’s first birthday.

1. Nina Altuve Was Born in Venezuela

Like her husband, Nina was born in Venezuela. She grew up in Maracay, Aragua, a Venezuelan baseball hotbed, according to FabWags. The city is located in the northern part of the country and is also referred to as “Ciudad Jardín” or “Garden City.”

Maracay is also the birthplace of other MLB players Elvis Andrus, Alberto Callaspo, Miguel Cabrera, and Aníbal Sánchez, in addition to former MLBer Carlos Guillén. Former player Bobby Abreu hails from nearby Turmero, about a half hour’s drive away.

According to FabWags, Nina has two brothers, Alfredo David and Justo Emilio. In 2014, she and Jose traveled back home to spend time with his family during the off-season, according to Sports Illustrated. Jose proudly represented his home nation in 2017’s World Baseball Classic, his first appearance in the annual preseason tournament.

2. Nina Is a Bio Analyst

Mrs. Altuve might be her husband’s number one cheerleader, but she also has a pretty impressive degree. According to FabWags, she is a bio analyst. She obtained her degree from the University of Carabobo in Venezuela.

“Bioanalysts, or bioinformaticians, take part in basic and applied research in order to enhance knowledge about living organisms, manage natural resources and develop new practices and products in the fields of medicine and agriculture. They work in labs or in the field for the government; environmental consulting and natural resources companies; public utilities; chemical, pharmaceutical and biotech companies; and in health care and teaching establishments,” PharmaJob explains.

It is unclear if Nina Altuve currently holds a job in her field. It appears as though she is now a stay-at-home mom.

In addition to being super smart, it’s no secret that Nina is a good-looking woman. Ahead of the 2016 MLB All-Star Game, she made Busted Coverage’s list of the Hottest WAGs of the players participating in the game.

Nina has posted quite a few selfies on her private Instagram account and isn’t shy when it comes to showing off her body.

3. She Has Been With Jose for 11 Years, But She Also Has ‘Another Love’

Nina and Jose started dating when they were just teenagers, according to FabWags. As you can see in the photo caption above, the couple celebrated their 10-year anniversary last November. This year, they will celebrate year number 11.

Jose Altuve is 27 years old, which means that he’s been with Nina since he was 16.According to Sports Illustrated, the two were high school sweethearts. But apparently Jose is not the only love in Nina’s life.

An album on her Facebook profile, facetiously entitled “mi otrooo amorsitooo” (“my other love”), makes it clear she’s got a major crush on Formula One driver Fernando Alonso. While Jose and Nina appear to have traveled extensively, it’s unclear if she’s ever encountered Alonso, who hails from Spain and currently drives for MacLaren-Honda.

Nina got pregnant in 2016. Toward the end of her pregnancy, she did a maternity photoshoot. Jose shared a few of those intimate photos on his Instagram page.

The happy couple welcomed their daughter, Melanie A. Altuve, in October of that year, a few days ahead of her November 3 due date. According to the Houston Chronicle, both Jose and Nina referred to their newborn as a “little princess” after she was born.

“I think she’s going to help me to become a better player. Because you need some time off from baseball. Like when you have a bad game or you end up playing really good, you go home and you need to chill out. Like: ‘OK I don’t want to know anything about baseball until the next day,'” Jose told USA Today back in February. “Now when I’m on the field I just think about playing baseball, but then when I go home I just think about her and talking to her and what can I do to help her — just everything about her. Baseball is the thing I do, and she’s what I’m doing after that. So she fits perfectly into my life,” he added.

Jose also said that his daughter is a bigger fan of his wife — and he’s okay with that!

5. She Loves to Travel

Nina has traveled to several tropical locations and has enjoyed many vacations with her husband, according to the website Player Wives. In 2013, Nina posted photos of herself in Paris, France, sitting in front of the Eiffel Tower.

In 2014, she went paragliding. Later that year, she and Jose were spotted vacationing in Punta Cana in the Dominican Republic. A few months later, the duo were spotted in Walt Disney World in Orlando, Florida.

Nina has shared pictures of herself in all different places from Europe to New York City. She loves the beach and has spent quite a bit of time having fun in the sun with her husband over the years. 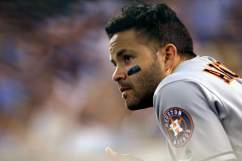