Getty Colin Kaepernick continues to be a hot name for teams looking for a quarterback.

Garoppolo was selected in second round of the 2014 NFL Draft by the Patriots, and he got his time to shine after just a couple seasons. He started the first two games of New England’s 2016-17 season when Tom Brady was finally suspended following “Deflategate.” In those two starts, Garoppolo went 42-for-59 with 4 touchdowns and no interceptions before suffering a shoulder sprain.

There had been talks about the Patriots potential dealing Garoppolo once Brady was back from his suspension, and the trade finally got done in virtually no time. According to ESPN’s Adam Schefter, the two sides started discussing a deal Monday morning and came up with a deal just hours later.

But the trade leaves the Patriots without a backup quarterback behind Brady. The also don’t currently have one on the practice squad, so they’ll have to sign one by the time they take the field in two weeks — they have a bye Week 9.

That’s opened the door for much speculation as to who the Patriots would realistically sign. So, what about Colin Kaepernick? Despite several quarterback injuries around the league, teams have opted to pass up on veteran quarterback.

But could the Patriots be the ones? Do you think they should sign him? Vote in the poll below:

Many owners and general managers across the league have remained hesitant to give the former 49ers quarterback a call. Some speculate it’s because of his protests during the national anthem and the media firestorm that comes with it. Others say the 29-year-old quarterback doesn’t have what it takes anymore to lead an NFL offense.

When President Donald Trump criticized the ongoing protests in the NFL last month, Patriots owner Robert Kraft, who’s a supporter of the president, fired back. He praised his players and applauded their effort to “peacefully affect social change and raise awareness in a manner that they feel is most impactful.”

Most recently, though, reports say Kaepernick’s legal team is focusing in on Kraft and other owners across the league as they search for proof that owners colluded against him.

The Patriots could certainly sign Kaepernick, but it seems unlikely they would given the history with Kraft. 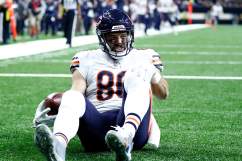 Read More
New England Patriots, NFL
With Jimmy Garoppolo being traded to the San Francisco 49ers, some have called for the Patriots to sign Colin Kaepernick as a backup to Tom Brady.