Surgery went well. Thanks for all the love, support, thoughts and prayers. #comebackstartsnow #riseagain #

Hours after quarterback Aaron Rodgers underwent successful surgery on his fractured collarbone, the Green Bay Packers announced they’ve placed him on injured reserve. The designation means he’ll be out for a minimum of eight weeks.

There was a glimmer of hope that maybe Rodgers could get healthy and come back toward the end of the season. But the decision by the team Friday signals that’s in all likelihood not a possibility.

Rodgers suffered the severe injury during the first quarter of Sunday’s loss against the Minnesota Vikings. He was tackled after passing a ball to Martellus Bennett and hit the ground hard, rolling on his shoulder. He laid there in obvious pain for some time as team doctors tended to him. Doctors helped him to the sideline and then carted to the locker room, where the severity of the injury was confirmed.

Rodgers had surgery on the injured collarbone Thursday and posted a post-procedure message to his Instagram account.

“Surgery went well,” Rodger wrote in the post. “Thanks for all the love, support, thoughts and prayers. #comebackstartsnow #riseagain”

Rodgers suffered a similar injury during Week 4 of the 2013-14 season and came back to lead the Packers to the NFC North championship in a Week 17 game against the Chicago Bears. But that injury was to his left collarbone, where this one is to his right — his throwing shoulder.

The Packers will now be led by third-year player Brett Hundley, who was drafted in the fifth round of the 2015 NFL Draft out of UCLA. Earlier this week, McCarthy said he has the utmost confidence in Hundley and seemed agitated fielding questions from reporters on if the team would consider signing free agent Colin Kaepernick.

“Did you just listen to the question I just answered?” McCarthy said to a reporter. “Okay, I got three years invested in Brett Hundley, two years invested in Joe Callahan, the quarterback room is exactly where it needs to be.”

Hundley will get his first start under center Sunday, when the Packers host the New Orleans Saints. 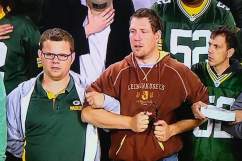