Nicole Auerbach hadn’t attended a college football game until she was a freshman at the University of Michigan. Flash forward 10 years, and Auerbach is a senior college football writer at The Athletic, a new, subscription-based sports site website.

She joins us on our first episode of the Ball Like a Girl podcast to discuss her journey to becoming a prominent voice in the college sports landscape. A new Ball Like a Girl episode will go live every Wednesday, featuring an in-depth conversation with an influential woman in the sports world. Upcoming guests include ESPN’s Laura Rutledge, National Pro Fastpitch softball commissioner Cheri Kempf and NFL Network’s Aditi Kinkhabwala.

Auerbach has risen to success at a relatively young age in an extremely competitive career. However, it hasn’t come without a set of challenges. Like many women in a male-dominated field, Auerbach has experienced pushback and criticism based on her gender.

One of the most striking moments in her career came in 2008, when she was told she was not permitted to enter the locker room of a minor league baseball team she was covering.

Since a 1978 ruling, women have had equal access to locker rooms, which was why Auerbach, then an intern at The Trentonian who was assigned to cover the Double-A Trenton Thunder, was so perplexed when she was told she could not enter, although her male peers had access. She had a deadline to meet and a job to do, just like her colleagues.

Auerbach wouldn’t take no for an answer, and the next day was given access to conduct interviews in the locker room, along with the rest of the journalists.

That story is just one that Auerbach discusses in this week’s Ball Like a Girl podcast. In the episode, Auerbach shares insight into the day-to-day challenges female sports reporters face, how she found success early on in her career, and why she felt it was important to join the #MeToo campaign.

Ball Like a Girl: Looking at your career, you’ve risen quickly in this profession. You’re in a prominent role, you’re a senior writer at a young age. Do you feel you’ve had any pushback because of how young you are or do you feel any resentment from other people in the profession as a result of that?

Nicole Auerbach: It was interesting because I interned at The Boston Globe right after I graduated college, it was the summer of 2011, and then from there, I went to USA Today where I had interned previously.

And my first year, the job was a digital producer, a blogger — this was before “For the Win” existed and I was doing bubble tracking, bracketology type stuff. It was very low on the totem pole, it was posting everyone else’s stories, it wasn’t reporting. And after that year, we ended up having a restructuring and people could interview for whatever job they wanted and that’s when I was able to land a reporting position. But at that point I’m still 23 and I’m labeled as a national basketball reporter and then over the next couple of years, they added more college football into the mix and at this point, they added me to the Olympics team so I went to London and covered swimming in Rio and so yea, it was young. And I think there were some — I don’t think it was internally, it was more externally. I think those are types of dream jobs for people.

I used to get emails from students and I don’t think they meant them the way they came across, but the emails would basically be like, “Oh, so you’re 23, 24 and you’re at USA Today — clearly you found some sort of loophole or shortcut, what is it? How did you get there so fast?”

It is insulting because I worked really, really hard to land the internships I had and then do well in them and then keep maintaining relationships so when they had a job they called me and it was a bottom level job and then chips fall and you work your way up.

I think you have to have talent, you have to be a good reporter, and make all of those calls and work those long hours, but you also have to work really hard.

BLAG: Relationship building is such a huge aspect of the job, I think people from the outside don’t realize that interviews aren’t handed to you, sources aren’t handed to you. You don’t have a set time for one-on-one interviews on a weekly basis with these coaches and players, so how do you approach that relationship building experience as someone who’s younger and let’s face it, as someone who’s a woman.

Auerbach: That’s a great question and I do think that people don’t quite realize that or maybe people outside of the industry think that everything is maybe inside a press conference or something because that’s what they see on TV.

I think I’ve always tried to approach any relationship-building — when you’re networking with editors and writers and then eventually sources once you have a beat, I just always try to be genuinely interested. I can tell when I meet someone if all they’re interested in is getting something out of me and I never want people to feel that way about me. So yes, I may bug them when there’s a coaching change or something’s going on, but I’m hoping that prior to that we have built enough of a solid relationship where they understand that I am genuinely interested in what they think about things, how things are going — even their thoughts on teams in their league, how their family is doing. That I actually care about them as a person.

That takes time and it doesn’t always result in a newsworthy confirmation or tip right away, but I think that people value that.

Then I’m like okay, what time am I texting or calling my sources, what tone am I using in the text message and I list all of these things off in addition to thinking about what I’m wearing and how I’m interacting with people in person and x,y,z and I tell this to my male colleagues who have the same job I do and they go, “I don’t think about any of those things.”

On a daily basis, we have the same job, but it’s much more exhausting and requires more from me.

BLAG: Do you feel your gender has ever been a hindrance?

Auerbach: Early in my profession, my very first internship, the minor league team that I was covering did try to not let me in the locker room and it was 2008. They were trying to justify that I was an intern and that’s why I wasn’t getting let in.

I’d have to wait around and they would bring out players and it would take forever. So then my editor got involved and a day later it was like, “Nicole’s going to be in the locker room everyone just so you know.”

I had a very similar experience at another internship where there was a head coach who ended an interview by asking if I understood everything he said.

I left and went to my office and was venting about it, and my editor said, “well you know what, there are 10 teams that we cover in this league and you get to pick what games you go to and you don’t have to cover this guy.”

Then I just picked other games to cover — I had that support behind me.

When there have been little instances of things, or a source is trying to cross the line, or whatever I’ve always had great editors and coworkers.

To listen to Auerbach’s full interview, click on the audio file below. 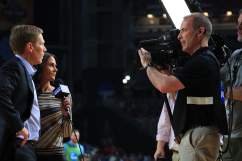 Introducing Ball Like a Girl, a Conversation About Women in Sports