Marvin Bagley left Duke’s Champions Classic matchup against Michigan State with 10 minutes left in the first half. Bagley went up for a rebound, and appeared to be poked in his left eye by his own teammate. Bagley immediately went down, and the Duke staff held up towels to try to block cameras from getting a view of him laying on the ground.

Marvin Bagley had an apparent eye injury and there is a crew to try to make sure you can’t see anything. pic.twitter.com/PdxAIk0etF

Bagley eventually got up, and went to the locker room after briefly sitting on the bench. ESPN’s Maria Taylor reported Bagley will not be returning to the game, and Duke did not elaborate on the severity of the injury aside from referring to it as an “eye injury.”

After trailing heavily, Michigan State immediately went on a run without Bagley on the court, and took the lead away from the Blue Devils. In Heavy’s latest mock draft, Bagley was the top pick, and is widely regarded as one of the top 2018 NBA prospects.

Many basketball fans were looking forward to getting their first glimpse of Bagley in a Duke uniform. Bagley got off to a solid start with four points and six rebounds before leaving the game with the eye injury.

Bagley is off to a good start to his college basketball career after putting up a double-double in each of his first two games with Duke. Bagley was originally slated to be part of the 2018 class, but reclassified much to the delight of Duke fans.

Bagley spoke to the Sporting News about his transition to college.

For me, coming in with this group of guys, it was a big adjustment for me. Obviously everybody on this team can do things offensively, can score the ball. So, it was a thing for me to see where I could come in and bring my talent in, try to put it in a group like this.

Bagley has long been on the NBA radar as a top high school prospect. What is there to like about Bagley’s game? For starters, Bagley has unique athleticism that allows him to be a factor on every play. He has a high motor, and has the potential to develop into an elite rebounder thanks to a combination of his desire and athleticism.

Offensively, Bagley is going to get most of his points around the rim in the first few months at Duke. His post offense is raw, and we have not seen a lot of outside shooting from Bagley early in his career. Let’s hope Bagley is not forced to miss extended time as he recovers from an eye injury. While he would not return to action against Michigan State, Bagley rejoined his teammates on the bench. 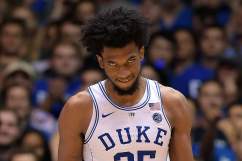 Read More
College Basketball, Duke
After being poked in the eye in the Duke-Michigan State matchup, Marvin Bagley left the game. Find out more details on Bagley's injury, and watch the play.