New photos of Sammy Sosa have social media “freaking out,” according to Sports Illustrated. The photos of Sosa were taken in London and quickly found their way to Twitter, where they have been analyzed and criticized for days.

As you can see in the photos below, Sosa, who will turn 49 on November 12, looks very different today than he did back in his baseball days.

What in God’s green earth happened to Sammy Sosa??? Looks like Bob from Stranger Things pic.twitter.com/Mn7YRU2rV7

These new photos of Sosa have caused confusion for many Twitter users, some even expressing concern for Sosa’s overall mental health.

“Just seen this on my IG feed and I swear, I hope I run into Sammy Sosa because I need to ask him a few questions,” wrote one Twitter user.

“Can I just say that the stuff where people make fun of Sammy Sosa’s lighter-skinned appearance makes me deeply uncomfortable? Not even from a racial perspective, but mostly from a health/mental health perspective. Lay off,” added another.

Back in July, Sosa made headlines after an appearance on ESPN. Wearing a pink coat and a pink fedora, Sosa debuted a new look that included much lighter skin. At the time, Twitter filled up with so many memes that Sosa’s name began trending.

Sosa’s “bleached skin” started nearly a decade ago. Although many people wondered if Sosa’s skin change was a result of steroid use, the former Chicago Cubs star had a different explanation. In an interview from 2009, Sosa talked about the changing color of his skin and blamed it on a new cream. Sosa said that he used this new cream to “soften” his skin, but it also made his skin lighter in color.

“It’s a cream that I have, that I use to soften [my skin], but has bleached me some. I’m not a racist, I live my life happily … What happened was that I had been using the cream for a long time and that, combined with the bright TV lights, made my face look whiter than it really is. I don’t think I look like Michael Jackson,” he said while on Univision’s Primer Impacto. Although Sosa made it seem like he didn’t know that the cream would have a lightening effect, he actually referred to it as “bleaching cream” at least once.

As Newsweek points out, there have been several other celebrities who have been accused of bleaching their skin. They include La Toya Jackson, Beyonce, Rihanna, Eva Longoria, Lil Kim, and Jennifer Lopez, to name a few.

Back in June, Marie Claire published an article about skin bleaching. The article focused on the trend which has been very popular in Jamaica for years.

“Many of the women interviewed for this story said they got compliments, were told they looked ‘cute,’ or were given more attention after they bleached their skin. A number of women said lighter skin looks better in photographs, and that those images get more views when posted on social media. The payoff is significant enough that even those who don‘t have a lot of disposable income will spend significant amounts on their bleaching habit.”

Interestingly, Sosa has never admitted that he likes the appearance of his lighter skin tone, nor has he ever said that he’s purposely bleached his skin. 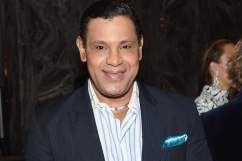