One day after his body was recovered from the Gulf of Mexico, witness video surfaced showing the moments before former MLB pitcher Roy Halladay‘s aircraft crashed.

The video, obtained by TMZ Sports, is filmed by several people on a nearby boat. The video shows what’s believed to be Halladay’s Icon A5 flying over the Gulf, and it starts from hundreds of feet in the air before plummeting down just several feet above the water — to the disbelief of the witnesses.

A subsequent video filmed by the witnesses say they were heading out to the downed aircraft, which they saw crash minutes beforehand.

“This was crazy, we saw it go into the Gulf of Mexico, literally,” the man filming says.

The group sounds stunned as they approach the scene of the crash and utter several profanities.

“Is anybody calling 911?” a man asks before surveying the wreckage. “Oh my God, bro, what was he thinking?”

Halladay’s A5 plane is described as being designed to make flying simple and has drawn comparisons of being a sports car with wings that’s able to move throughout the air like a jet ski.

Watch the video below (NOTE: The video contains profane language):

Roy Halladay Plane Crash Video, Witnesses Say He Was Showboating | TMZ SportsRoy Halladay appeared to be hot doggin' it in his plane in the moments before his crash — making extreme and unusual changes in altitude … this according to multiple witnesses. TMZ Sports has obtained footage shot by boaters who say the ex-MLB star's plane was going from 100 feet in the air down to…2017-11-08T17:29:15.000Z

The Pasco County Sheriff’s Office identified Halladay as the deceased pilot at a press conference several hours after the crash following a recovery mission.

The deceased has been confirmed as Roy Doc Halladay.

We are deeply saddened by the loss of this amazing and generous individual. Our hearts go out to Roy and his family.

Halladay, 40, was one of the most successful pitchers in the modern era with a career that stretched 16 years. He played for the Toronto Blue Jays and the Philadelphia Phillies and is survived by his two children and wife, Brandy. Halladay threw two no-hitters in his career — during the same season — and will be remembered for his continuous philanthropy. After he announced his retirement in 2013, he obtained his pilot’s license and started flying planes while also coaching his children’s baseball teams.

Halladay said that his father was a corporate pilot and he grew up around airplanes, which inspired him to start flying.

“In the air or on the water!” his Twitter bio read, with a photo of him piloting an aircraft as his profile picture.

Many of his social media posts involved him flying with friends and family members, and one in particular, posted October 31, showed him standing in front of the plane that crashed into the Gulf.

I have dreamed about owning a A5 since I retired! Real life is better then my dreams!! Thx Kirk & everyone @ICONAircraft pic.twitter.com/wkk6TtjAY4

An October 12 press release by ICON Aircraft said that it delivered the first Model Year 2018 (MY18) A5 to Halladay, who’s been a “regular ICON A5 renter” for years. That was the plane which ended up crashing into the Gulf, law enforcement officials said.

Pitcher Roy Halladay Dies After Crashing ICON A5 Plane He Promoted in October (File)Credit: ICON Aircraft To download this video for news use you MUST go to: newswire.storyful.com To obtain a Storyful subscription, contact sales@storyful.com. This video has been uploaded for use by Storyful's subscription clients with the permission of the content owner. Clients can see and search Storyful Licensed Videos here: newswire.storyful.com2017-11-07T22:59:49.000Z

“I’ve been dreaming about flying since I was a boy but was only able to become a pilot once I retired from baseball,” Halladay said in the release. “I’ve owned other aircraft, but no aircraft embodies the adventure or captured the dream of flying like the A5. Not only is it the safest and easiest aircraft I’ve ever flown, it is hands-down the most fun. The beaches, lakes, and waterways my family and I get to explore around Florida are mind-blowing. Words don’t do justice to what the A5 allows us to experience. Even my wife, who used to be uncomfortable in small planes, now asks where we should take the A5 for the weekend. I’m honored to own the first A5 Founders Edition.”

I love the Players & Parents of our Florida Burn! They keep proving why they’re the best team on the field but more important the classiest! pic.twitter.com/4agAeCO4wY 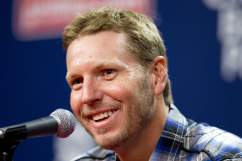 Read More
Baseball, MLB
TMZ Sports obtained a video showing what appears to be the moments before former MLB pitcher Roy Halladay's plane crashed into the Gulf of Mexico.