Aaron Boone has returned to the New York Yankees. Various media outlets are reporting that Boone, the 44-year-old responsible for one of the most memorable moments in recent Yankees history, will be hired as the franchise’s next manager.

Boone is best known for hitting a game-winning home run in Game 7 of the 2003 ALDS against the Boston Red Sox. He played third base for the Bronx Bombers until 2009.

After retiring from the MLB, Boone became an analyst for ESPN in 2010, but he has never managed or coached baseball at any level. He comes from a prestigious baseball family, with his grandfather, father and brother all playing in the MLB. He’s been married to Laura Cover for over 15 years. She’s a former Playboy Bunny and has been involved with numerous charities over the years.

It’s unclear exactly how Cover and Boone met or for how long they dated for, but they got married November 9, 2002. The couple has two children together: A daughter named Bella, and a son named Brandon. They also adopted two boys, Jeanel and Sergot.

Boone spoke about his family life and the values he tries to teach to his two children during a 2014 interview with LifeOfDad.com. He said that watching Brandon play sports like football and baseball was something that he really enjoyed.

“I try to impart things that I know without being overwhelming,” he said during the Q&A. “I really hope that he has as much fun as he can in what he is doing. Even when you play at the Major League level you are playing it as an eight year old.”

The Boone family lives in Scottsdale, Arizona. The former MLBer revealed that his family owns a cabin in northern Arizona where they spend a lot of time during the winter.

“In the wintertime right now if it snows all weekend it is awesome to just go up there and see it snow, sled, and mess around in the snow with the kids,” Boone said to the blog. “It is also fun to go up there in the summer time to go swimming and play golf. Just being in a mountain community is something my family has enjoyed.”

2. Cover Entered a Playboy Studio Without Any Modeling Experience & Got the Job

According to her IMDb page, Cover was born on May 6, 1977, in Bucyrus, Ohio, to a mother who worked as a registered nurse. She was raised in the Christian religion and performed in gymnastics and played soccer during high school. She got involved with the adult modeling industry after she attended auditioned at an open call at a Playboy studio.

“I just walked into the studio, which I’m told is kind of unusual,” she said during an interview with Playboy for her feature spread. “I don’t have modeling experience. I didn’t have any nude stuff, and I didn’t want to go get some from Joe Photographer. I went to the Playboy studio by myself one day. They have an open call and you have a Polaroid taken.”

Cover said during her interview that she became a lot more feminine after high school, and vowed to “always be true” to her self. She also revealed that she’s involved with several charities, including a breast cancer foundation and one which helps children in third-world countries.

“I’ve had a Christian Children’s Fund child, Bernabe, for two years,” she said at the time. “He is from Guatemala. He’s three, not old enough to write — sometimes I get letters that his sister writes. It’s my way of making a contribution.”

Laura Cover with children she works with through charities.

To this day, Cover continues to work with the charity, among various others.

3. Cover Was Playmate of the Month in Playboy Magazine in 1998

Shortly after landing the job as a Playboy bunny, she was selected Playmate of the Month in the October 1998 issue of the magazine. Her centerfold was photographed by Amy Freytag, and she also appeared in other magazine editions and videos.

Cover’s biography on Playboy‘s website described her as being a “buxom, curvy, and sexy well-built blonde.”

She also posed nude for Mystique magazine and Talking Blue.

4. Cover Appeared on an Episode of the Game Show Weakest Link

I just ordered the biggest chicken ever. That's LB in the background taking a pic too.

In 2001, Cover appeared on the “Playmate Edition” of the TV game show Weakest Link, TV Guide noted in its programming. She was on the show with other Playboy bunnies competing for money for charity. Also on the show were Shanna Moakler, Julie McCullough, Renee Tenison, Jennifer Walcott, Daphnee Lynn Duplaix, Anna Marie Goddard, and Stephanie Heinrich.

The game show tasked contestants with trivia questions while getting insults hurled at them by British host Anne Robinson. The group continues voting off members it deems are the “weakest link” until there’s one person remaining.

5. Cover Was Pregnant With the Couple’s Second Child When Boone Had to Have Open-Heart Surgery

Happy BDay @l2tb. Words can't express how blessed I feel to call you my wife and mom to our kiddos. I love you girl!

In 2009, when he was a member of the Houston Astros, Boone found out that his career was in jeopardy when he was told by doctors that he needed to have open-heart surgery to replace a bicuspid aortic valve. It’s a condition that he was aware he had since he played baseball in college, but recent tests showed that it worsened and he needed an operation in short order.

“I’ve monitored it all these years,” Boone said during an interview to The New York Times after a news conference announcing the procedure. “I knew this day was out there. I just didn’t know it was now.”

Doctors told him that after he recovered from the surgery, he could return to play baseball. But the news was extremely scary for his family and Cover, who was pregnant with their second child at the time.

Boone had the operation at Stanford University Hospital in California, and it was a success. He ended up returning to baseball within about five months on August 10, 2009, and started a rehab stint in the Astros’ minor league system. He was activated to the MLB roster on September 1 and made his season debut the next day. He said he intended on retiring following the season, though. 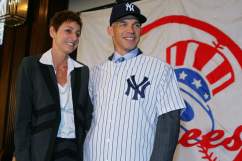