Getty Georgia quarterback Jake Fromm once committed to Alabama before receiving an offer from Kirby Smart.

Georgia entered the season with a lot of hype surrounding their quarterback, but it was their backup who would lead the Bulldogs to a national title. Jacob Eason had both the pedigree and experience needed to lead the Bulldogs to an SEC East division title. Eason was a five-star recruit ranked as Rivals No. 7 recruit, and top ranked quarterback in the 2016 class. He started his freshman season, and entered the 2017 season as Georgia’s starter prior to an early season knee injury.

Jake Fromm was also highly touted as a five-star quarterback, and No. 20 overall recruit for the 2017 class. Not only was Fromm the backup to start the season, but he was originally committed to the team Georgia faces in the national title game, Alabama. According to 247 Sports, Fromm committed his junior season to the Crimson Tide, but after Kirby Smart headed to Athens he offered Fromm a scholarship to Georgia. Fromm grew up idolizing the Bulldogs, so it was a dream come true. Fromm spoke with Heavy about his decision to head to Athens over Tuscaloosa.

“Growing up a Georgia boy, you always want to play for the Dogs,” Fromm told Heavy. “[I’m] thankful for when Coach Smart came over and gave me the opportunity. And now I’m here, playing for a National Championship, and trying to get it done…Coach Smart, he’s an incredible football coach, an incredible man. And now we’re here, playing for him, and just kind of hope we [win the national championship].”

Fromm’s father, Emerson Fromm, spoke with 247 Sports about why his son decided to flip from Alabama to Georgia.

Nick Saban wants it to be about Alabama and Coach Saban. He doesn’t want you to really deal with the coordinators, even though [Lane] Kiffin was the recruiter. As soon as Kiffin kind of put his blessing on Jake, we didn’t talk to Kiffin a whole lot. It was to the point where sometimes you’d might be in the indoor and see Kiffin, and he might go the other way. I’m serious. It’s just bizarre. We got kind of close with Kirby because we didn’t have anybody to talk to. Kirby is from Georgia and it’s just easy to relate. That’s why he’s blowing everybody up on the recruiting end because he’s just a very personable person…“[Kirby] made it very easy when he left Alabama. It’s just like a no-brainer.”

Fromm did not receive an offer from former Georgia coach Mark Richt, but Smart’s offer once he took over was enough for Fromm to flip his commitment from Alabama. Even though Fromm committed to Georgia, there was no expectation he would come in and start right away given Eason was a highly-touted player in the prior class.

Given the strength of the Georgia offense is their rushing attack, Fromm has not been asked to air it out a lot during the season. Fromm completed 63.7 percent of his passes for 2,383 yards, 23 touchdowns and five interceptions. The opportunity to play for a national championship for the team he grew up idolizing counts more to Fromm than any statistic. 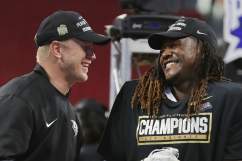