Jalen Hurts is still one year away from draft eligibility, but NFL scouts are already coming around to the idea of the Alabama QB taking his talent to the next level. For some however, Hurts’ mechanical flaws may be too glaring to look at him as a QB prospect.

Let’s look at the facts: Hurts started for Alabama as a true freshman and was named SEC Offensive Player of the Year. He’s taken Bama to back-to-back national titles, and has torched defenses with both his arms and legs. But Hurts is also driving the car with the most horsepower in the SEC, and is hardly called upon to “win the game” as a passer.

According to former Alabama lineman Barrett Jones, the move from high school to the SEC is a much bigger jump than from college to the NFL. That’s the underlying part of what makes Hurts so talented. When he’s navigating the best offense in the country to a national title, it’s easy to forget that he’s only 19.

Aside from his obvious athletic prowess, Hurts excels as a decision-maker. Young quarterbacks are typically mistake-prone, yet Hurts heads into the final game of his second season having thrown just one interception on the year.

I’m no expert on quarterback mechanics, but Hurts is far from perfect in that regard. This article notes well how Hurts has an exaggerated gathering motion, which in turn leads to a slow release time. Last year, one scout told SI’s Pete Thamel that Hurts simply “can’t throw.”

Running ability matters in the NFL, but throwing mechanics are everything. It’s why so many scouts are willing to look past Josh Rosen’s shenanigans. Eventually all quarterbacks will be unable to run, and all good NFL defenses can force quarterbacks to stay in the pocket and make throws.

At 6’1″ and 201 pounds, Hurts is undersized compared to a prototypical quarterback. It’ll be interesting to see what NFL scouts do with Lamar Jackson during draft evaluations, and if the “athlete” title will also fall to Hurts come draft time.

I find it hard to evaluate Hurts because his supporting cast is just too good. He’s got a stable of running backs and the soon-to-be top receiver in the draft, and any mistakes he makes fall on the shoulders of one of the nation’s best defensive units. He’s also coached by Nick Saban, who for all his accolades, has yet to produce a star QB at the next level.

If you think Hurts is a QB with first round talent, don’t get yourself too excited. Walter Football has a mock draft already up for 2019, and Hurts is (predictably) nowhere to be found in the first round. Charlie Campbell has six quarterbacks selected in the first round, including Georgia QB Jacob Eason and Auburn QB Jarrett Stidham.

Of course, there’s always the chance Hurts stays for all four years of eligibility. That would put him in the 2020 draft class along with quarterbacks like Kellen Mond (Texas A&M) and Austin Kendall (Oklahoma). This SEC forum post has a 2020 mock draft from Todd McShay that shows Hurts going 15th overall to the Los Angeles Chargers. 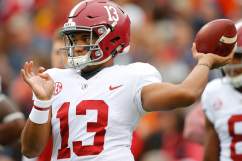 The Tua Tagovailoa Era Has Begun at Alabama