Getty Stephon Gilmore of the New England Patriots deflects a pass intended for Dede Westbrook of the Jacksonville Jaguars in the fourth quarter during the AFC Championship Game.

Stephon Gilmore made an amazing lunging deflection to knock the ball away from Jacksonville Jaguars wide receiver Dede Westbrook to help send the New England Patriots to the Super Bowl. You can watch the play below:

The spectacular play game on 4th and 14, and allowed the Patriots to take over on downs. The offense sealed the victory with a Dion Lewis run, giving New England a 24-20 AFC Championship win. Gilmore and the Patriots defense were tasked with stopping the Jaguars after Danny Amendola made a magnificent go-ahead touchdown catch on the previous drive.

Gilmore, 27, signed a five-year $65 million contract with the Patriots before the 2017 season. He previously spent five seasons in Buffalo after being drafted with the 10th pick in 2012 by the Bills. 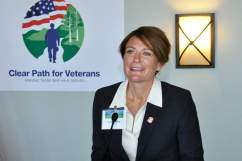