Getty Danny Amendola is the hero for New England.

The New England Patriots will look to defend their Super Bowl title against the Philadelphia Eagles. The game will take place at U.S. Bank Stadium in Minneapolis on February 4th.

Shortly after the start of the second half, OddsShark released its official Super Bowl 52 line for Patriots vs. Eagles:

These two teams have been front-runners since midseason, and they both earned the right to play in this game. It wont be the same without Eagles QB Carson Wentz, but Nick Foles certainly did enough in the NFC Championship to show that he can make plays when called upon.

The Eagles will certainly stifle the Patriots on the ground, but the key matchup is Brady against Philly’s pass rush.

New England is back in the Super Bowl, and this time they should have a healthy Rob Gronkowski. The All-Pro tight end was knocked out of the AFC Championship with a concussion, but has two weeks to recover and should play an impact in the game. The Eagles have been one of the league’s best teams at covering the tight end this season, but Gronkowski will have to find a way to get involved for the Patriots to be successful.

Philadelphia was the best team against the run this season, and will try to force the same game script they played in the NFC Championship. The Eagles want to run the ball, build a lead, and let their pass-rushers on defense wreak havoc.

The critical matchup between these teams is the execution of Nick Foles against the defensive scheme of Bill Belichick. The Patriots will have two weeks to figure out ways to harass the Eagles backup, who played outstanding in the NFC Championship.

Against the Vikings, Nick Foles was better on his deep ball than at any point this season. Foles was 2 for 15 on deep passes entering the NFC title game, but threw deep balls with pinpoint accuracy against Minnesota.

With two capable offenses, the over looks to be a popular bet. The over/under opened at 45.5, but expect it to move up as the game approaches. The Patriots proved against Jacksonville that no defense can stop them, and even losing Gronkowski won’t prevent them from getting the job done. Philadelphia will be able to run the ball, and LeGarrette Blount will be looking for revenge against his former team.

The Eagles can win the game by keeping it away from Brady. But in the end, he’s just too good. It’s really hard to pick against a healthy Patriots offense. 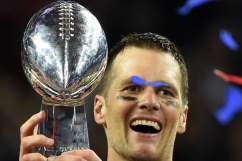