Tom Brady is listed on the New England Patriots injury report this week, and while some fans are freaking out, others are having a bit of fun with the news.

On Wednesday, January 17, the Patriots announced that Brady would not be participating in media day because he was with the team’s “medical staff.” Further information about what is ailing the 40-year-old Super Bowl champion was released about an hour later.

“The Patriots quarterback was listed as a limited participant on the injury report today with a right hand injury. That’s a new ailment for the 40-year-old signal caller,” the Boston Herald reported.

Brady has been dealing with a left shoulder injury on and off for the most of the 2017-2018 season. His achilles has also given him some grief, but he has been able to play through the ailments, finishing the season 13-3, and leading his team to another AFC divisional championship.

This is certainly not the first time that the Patriots quarterback has been “injured” ahead of a football game and the Patriots did not give any indication that he would be unable to play in Sunday’s AFC Championship game against the Jacksonville Jaguars.

Back in October, Brady missed practice on a couple of days before New England took on the New York Jets. At the time, NBC Sports Boston reported that Brady sustained an AC Joint sprain in Week 4 against the Carolina Panthers. He aggravated that injury playing the Tampa Bay Buccaneers on October 5.

“I’m good. I’m not worried about it. I’ll be there Sunday,” Brady told reporters at a press conference that week. When the Patriots faced the Jets on October 15, New England took home another win, beating New York 24-17.

At the end of November, Brady missed practiced due to an achilles injury following the Patriots/Miami game on the 26th of that month.

“Brady took a bit of a beating during Sunday’s victory over the Miami Dolphins, and that didn’t help the situation with his sore Achilles. A botched snap in the first half led to Brady to diving after the ball with defenders falling on him. He also was sacked by Cameron Wake,” the NFL reported at the time.

The following Sunday, however, Brady was in the game, ready to take on the Buffalo Bills — and that’s exactly what he did. The Patriots ended up beating the Bills 23-3 on December 3.

The good news this time around is that Brady was at practice with his team on Wednesday, according to CBS Boston, even if his participation was “limited.”

Regardless, some people are still super concerned about the star quarterback — and his current health.

Below are some of the best reactions and the most entertaining memes following the news that Brady was missing Wednesday’s press conference.

Brady has a scheduled presser on Thursday, but it’s unclear if he will be attending.

If you believe in superstitions of any kind, you might think that Brady’s “injury” this week foreshadows a Sunday win. New England fans are hoping that is the case. 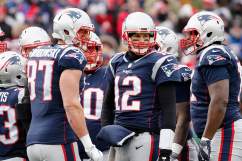 Read More
Football, New England Patriots, NFL, Tom Brady
Tom Brady is listed on this week's injury report. He missed media day at Gillette Stadium because he was with the team's "medical staff." Here are some of the best reactions on social media.