Getty Alexa Scimeca-Knierim and Christopher Knierim pose for photographers after the Championship Pairs during the 2018 Prudential U.S. Figure Skating Championships.

Alexa Scimeca Knierim and Chris Knierim are the lone pairs team that will represent Team USA at the Olympic Winter Games in PyeongChang 2018. The duo has a powerful bond on and off the ice.

Alexa nearly had to quit skating when she started to experience stomach issues in April 2016. However, the pair overcame her health challenges to reach their Olympic dream.

Here’s more about the Knierim’s skating career and their life together:

1. They Are the First Married Couple to Represent the U.S. Since 1998

GettyPair skaters Chris Knierim and Alexa Scimeca Knierim of the United States train during a practice session ahead of the PyeongChang 2018 Winter Olympic Games at Gangneung Ice Arena.

Alexa Scimeca-Knierim and Chris Knierim are the first married couple since Jenni Meno and Todd Sand in 1998 to compete for Team USA in pairs at an Olympic Games. Another husband and wife, Ron and Nancy Luddington, are the last to win a U.S. medal in pairs, earning bronze in 1960.

Skating has always had a strong influence in their relationship. The Knierims’ coach, Dalilah Sappenfield, even officiated their wedding.

“It’s as simple as another blessing in our journey,” Alexa told the media. “It is our lifelong dream to make the Olympic team.” 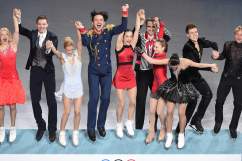 What Is the Team Figure Skating Event for the 2018 Olympics?

Alexa began skating in 1998. In the 2011–12 season, Scimeca competed with Ivan Dimitrov, with whom she trained in Connecticut.

It wasn’t until April 2012 that she teamed up with Chris, 30, and they qualified for their first world championships in their first season together, placing ninth.

However, Chris broke his leg in the 2014 Olympic season. Hampered by injury, they placed fourth at the 2014 U.S. Championships and were named second alternates to the 2014 Winter Olympic team.

A year later, they won their first U.S. title, and in late 2015, became the first U.S. pair to compete at the Grand Prix Final in eight years.

3. Alexa Was Diagnosed With a Life-Threatening Gastrointestinal Condition

GettyAlexa Scimeca and Chris Knierim of United States perform during the Pairs Short Program on day one of the 2015 ISU World Figure Skating Championships.

They were married on July 26, 2016, but that summer was also one of concern because of Alexa’s chronic pain and bouts of sickness.

Alexa became sick in April 2016, and her illness interrupted the Knierims’ training throughout the summer months that followed. She was properly diagnosed with a rare, life-threatening gastrointestinal condition in August and underwent two abdominal surgeries that month. The illness caused Alexa to lose 20 pounds and required three surgeries. For months, Alexa battled through regular episodes of vomiting, debilitating pain, difficulties with sleeping, and eating.

Knierim stated that when his wife initially returned to the ice following surgery, she had to hold his hands just to skate around in circles and could only skate for 10 minutes before having to go home for a nap because it was so physically draining.

“As that summer continued and as my body was at it weakest, my faith was at its strongest,” Alexa said. “A time passed as I approached the autumn season, I started to have more faith in myself and my journey, although physically I didn’t think I’d be in the position I am today, my faith really propelled me forward.”

Alexa added, “I’ll never forget how hard we had to work to get back to where we are now.”

4. They Are 1 of 3 Couples Currently Performing a Quad Twist Lift

The Knierims are one of only three couples in the world currently performing a quad twist lift.

They have a unique opportunity to compete four times on Olympic ice in PyeongChang.

“We’re both really excited being in the team event,” Chris told media on a recent teleconference. “Even if there was another pair team, we would still be doing both of the events. It’s a big opportunity when you go to an Olympics and you get to compete your short and long for a normal Olympics. But now, for the team event, we have the opportunity to compete two more times in front of the world.”

As the only U.S. pair team at the Olympics, the Knierims will participate in both the short and long programs of the team event. Within a week, they’ll compete again in the pairs’ event.

5. Their Coach Is Dalilah Sappenfield

GettyAlexa Scimeca-Knierim and Christopher Knierim celebrate in the kiss and cry after the Championship Pairs during the 2018 Prudential U.S. Figure Skating Championships.

Alexa, who is from Addison, Illinois, and Chris, who is from San Diego, live and train in Colorado Springs, Colorado.

They have credited much of their success to their coach, Dalilah Sappenfield.

“She changed me to be the athlete I dreamed about being before I moved to her,” Alexa told NBC. “She got a handle on my mentality and was able to use the best qualities of myself in training. Doing so, she helped me reach a lot of goals that I had wanted to.”

During Alexa’s illness, Sappenfield was much more than a coach, she became an extension of the Knierem’s family.

“[Sappenfield] became like a second mother to me when I was sick because I am away from home,” Alexa told NBC. “I’m in Colorado. My family’s in Illinois. Chris’s mom’s in Arizona. I didn’t have the family support that I needed when I was sick, going through all this turmoil and illness.

“Dalilah really stepped up and took me on like a daughter. She did not care about skating any more. She just wanted me to be healthy again. When you go through such a traumatic experience and they’re in the room with you the whole time, you create a bond that is unbreakable. Our journey goes so much further than the skating journey could take us.” 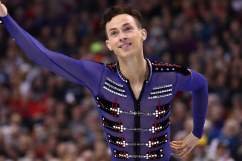