Alina Zagitova, a 15-year-old figure skater from Russia, is expected to challenge her fellow Russian, Evgenia Medvedeva, for a gold medal in PyeongChang. Both Russians performed flawlessly in their first performances in South Korea in the team competition, setting the stage for what could end up being a historic rivalry on the ice.

When Medvedeva, the Russian ice queen at the top of her game, suffered a foot injury, Zagitova took first place at the Russian National Figure Skating Championships. Then, she bested her in a stunning upset at the European Figure Skating Championships, winning by 5.38 points. Now the two Russians are anticipated to be each other’s toughest competition in South Korea.

Evgenia performed an exemplary first routine on February 10 in PyeongChang, scoring 81.06, the first woman to score over 81 points in the short program. However, Alina then dazzled in her own performance, besting even Mirai Nagasu after Nagasu became the first U.S. woman in history to land a triple axel in the Olympics.

Zagitova’s balletic artistry on the ice has entranced the judges and crowds. “…the country’s medal hopes are mainly tied to Evgenia Medvedeva and Alina Zagitova, who are expected to achieve podium places in figure skating,” RT noted, especially since many Russian athletes were not allowed to compete due to a doping scandal.

Thank you for your support to all my fans❤️❤️❤️???#japan #nagoya#gp17 #rilakkuma

Alina’s family history foretold her future career as her father forged a career on the ice. “Her dad is the trainer of Russian ice hockey team Izhstal,” Russia Beyond reports. According to the news site, Zagitova is from Izhevsk, which is located 790 miles east of Moscow.

She’s not the only figure skater in the family. According to the PyeongChang Olympics website, “Her younger sister Sabina has also competed in figure skating. Her father Ilnaz Zagitov played ice hockey at national level and has worked as an ice hockey coach.”

Alina certainly didn’t disappoint during her first performance in PyeongChang, and fans took notice of the artistry. 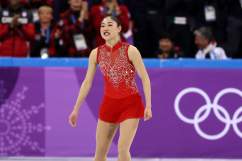 VIDEO: Mirai Nagasu Lands a Triple Axel at the Olympics

2. Alina Has Said She Doesn’t Have Many Friends & She Left Her Family to Train

Ice skating can be an isolating sport due to the amount of training time that is required. Alina has said she has few friends, according to Russia Beyond: “Only in figure skating, there are people who I see constantly. But this is sport, we are rivals.”

When watching her perform, it’s easy to forget she is only 15. She enjoys American television shows and playing with her pet cats and chinchillas, the site reports. Her hobbies were described as “Drawing, watching TV, travelling.”

Alina Zagitova was simply flawless, and her teammate Evgenia Medvedeva was LOVING IT! #WinterOlympics https://t.co/NsNuy9F46h pic.twitter.com/68448UQuL9

The skater doesn’t live with her parents or sister, though, as they all stayed in their Russian hometown, while she left to train. She “sees them about once every two months,” according to NBC.

If their elegant artistry on the ice bears similarities, there’s a reason for it. Zagitova and Medvedeva share the same coach. “Both athletes have been coached by Eteri Turberidze, who previously trained Yulia Lipnitskaya, guiding her to Olympic gold in 2014,” reports RT.

According to RT, “World and European champion Medvedeva had long been considered the uncontested favorite to clinch the Olympic title, until the first-year senior Zagitova broke her two-year winning record at the 2018 European Championship in Moscow.” Now the gold is up for grabs in many experts’ estimation.

Zagitova “became the first skater in the world to place all her jumps in the second part of the program,” RT reports. Their coach said she tells both young women to study the other. “Alina absolutely tries to copy her way to work, the amount of work and she doesn’t stop. This helps. I can sometimes show Zhenia and say, ‘Look how Alina is working,’ and I tell Alina, ‘Look how Zhenia is working,’” she said to NBC.

4. Alina Began Skating at the Age of Seven

Alina took to the ice early. She was seven. “It’s in my character that the more difficult it is, the better it is for me,” she has said.

As with many figure skating families, Alina’s sacrificed for her dreams. “By age 13, she and her grandmother moved to an apartment in Moscow so Zagitova could train with a new coach,” NBC reports.

All of the hard work paid off, and she upset Medvedeva right before heading into the Olympics. “The two-time world champion lost for the first time in more than two years, upset by training partner Alina Zagitova at the European Figure Skating Championships in Moscow,” reported NBC.

5. She Was Named After the Famed Olympic Gymnast Alina Kabaeva

Alina is named after another famous Alina. “Her parents chose her name, Alina, after watching the performance of Russian rhythmic gymnast Alina Kabaeva,” reports PyeongChang2018.com, quoting her saying, “I was named in her honour. When I was born, they did not give me a name until I was one year old. Once my parents watched gymnastics. Alina Kabaeva was competing, they looked at each other and decided to call me this name – Alina.”

Zagitova has said she idolizes Kabaeva, the site reports: “I know how strong her character is. And I liked very much how she performed.”

Alina Kabaeva is the alleged girlfriend of Russia’s Vladimir Putin.

According to NBC, it took a year for her parents to choose her name. “Zagitova was born three months after the Salt Lake City Olympics and without a name for her first year,” NBC reports.

Read More
5 Fast Facts, Breaking News, Russia, Winter Olympics 2018
Alina Zagitova is a Russian figure skating and many people are looking for her to be the biggest rival to fellow Russian Evgenia Medvedeva.