Getty Bill Belichick has won five Super Bowls as Patriots head coach, and an additional two championships as a coordinator.

A photo of Belichick wearing 10 rings went viral during the Patriots ring ceremony creating a lot of confusion. As CBSSports.com explained, three of the rings Belichick was wearing were for winning AFC titles. Belichick has seven Super Bowl championship rings counting his two championships as a Giants coordinator.

Belichick already owns the record for Super Bowl wins as a head coach with five, and has a chance to add to his lead. According to AL.com, former Steelers coach Chuck Noll is next in line with four. Bill Walsh and Joe Gibbs both have three Super Bowl rings. Vince Lombardi’s legacy isn’t straight forward as some of his success came before the Super Bowl era. Lombardi technically has two Super Bowl victories, winning the first two Super Bowls. He also coached three teams (1961, 1962, 1965) who won titles prior to the existence of the Super Bowl. You know you have done something right when they name the trophy after you.

A win in the 2018 Super Bowl would give Belichick his second set of back-to-back titles. Part of the reason Belichick has been able to maintain success is his commitment not to dwell on past success, and desire to move on to the next challenge. After the Patriots 2017 Super Bowl victory, Belichick spoke with CNBC’s Suzy Welch about his leadership style.

This philosophy helped get the Patriots back to the Super Bowl during the 2017 season. Here’s a look at Belichick’s Super Bowl history. 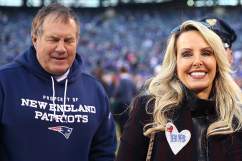