Jaelin Kauf with her family and friends.

Freestyle skier Jaelin Kauf is competing in the moguls for Team USA at the 2018 Winter Olympics in Pyeongchang.

Kauf, a 21-year-old first time Olympian, comes from an athletic family. Her mother, Patti, and father, Scott, are both retired champion moguls skiers and her brother played college football.

“I really didn’t know anything else besides skiing,” Kauf said of her childhood.

She told the Salt Lake Tribune, “I don’t think my parents actually really cared if I was a mogul skier. Of course now they love it that I am because they can really connect with the sport and know it so well. But they were always so encouraging, pushing me to do whatever I wanted, but to put everything into it.”

Her brother, Skyler Kauf, told the Jackson Hole News & Guide, “Our parents were our biggest role models in a lot of ways. We didn’t necessarily look up to professional athletes like Peyton Manning or Jeremy Bloom or anything like that. We looked up to Scott and Patti Kauf.”

Here’s what you need to know about Kauf and her family:

Scott Kauf grew up in the Pacific Northwest and worked at a resort where he started skiing moguls to boot-pack runs, he told Steamboat Today. He began competing as a teenager.

He competed on the pro tour with Jaelin’s mother. According to ESPN, “Kauf dominated the U.S. Freestyle team and Pro Mogul Tour with such a precise, mechanical style, they nicknamed him Robo-Kauf.”

“When you’re on a mogul run, you’re turning your skis quickly down the fall line, on and off your edges fast,” Scott Kauf told the New York Times in 1995 about the sport his family has perfected. “You pivot your ski into a swing turn that goes from the front side of the mogul, to its apex, and down the backside. Where you stop one turn is where you start the next.”

Kauf, who grew up in Kirkland, Washington, also competed at the X Games in Skier-X in 1998 at the age of 38, according to ESPN.

“Kauf has taken boys half his age to school before,” ESPN wrote in a preview of those X Games. “He came out of nowhere when he showed up at the U.S. Open in Vail last year. There were 300 skiers, and Kauf, the oldest among them, had never tried Skier X. He won. It was cool, he says. Seventeen-year-olds were going Who is this guy?”

Jaelin Kauf with her parents and brother.

Scott Kauf hoped to make the Olympics. He was a member of the U.S. Freestyle Skiing team in the early 1980s, and the sport was being considered for demonstration level at the Calgary games in 1984, according to Steamboat Today. But it didn’t make its debut until 1988, and by then he had already turned pro to collect a paycheck because he couldn’t wait.

Now, Scott, 57, is cheering on his daughter.

“I’m so impressed with Jaelin,” Scott Kauf told the Salt Lake Tribune after she qualified for the Olympics. She’s just getting started. She’s not new to this by any means, but with her abilities, she’s got a bright future.” 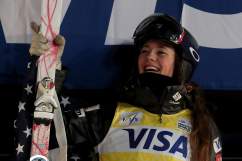 Patti Kauf-Melehes was a three-time moguls champ on the pro tour.

“Even if you’re a good skier, when you come to a mogul run and take that first look down, it’s always, oh-oh,” she told the New York Times in 1995.

She told Steamboat Today that she started skiing moguls competitively as an “act of defiance,” while she was working for a winter at a Steamboat Springs resort. She blew out her knee during her first competition, but didn’t give up on the sport.

“I was so mad I was determined to get good at them,” she told the news site. “I probably have a little of that tenacity Jaelin has. I’m not going to let anything get the best of me. … Everyone loved freestyle skiers. It was this new exciting sport. You were outdoors, and it was before Americans really were outdoor enthusiasts as much as they are now. Advertisers loved it, whether it was for gum commercials, beer commercials or drink commercials, skiing just embodied outdoor activity and fun.”

Like Scott Kauf, Patti turned pro early on in her career and was not able to join the Olympic team in 1992 when it became an event.

She retired in 1998 and then got back into skiing in the early 2000s, competing in skier cross and winning three bronze medals at the X Games. Her kids, Jaelin and Skyler, who were born while she was still on the pro tour, were then old enough to join her on the podium.

Ok that was fun. We all love Scott Kauf but do you remember this woman? That’s Patti Kauf winning one of her three X games medals in Ski cross POST kids! Rad. Her daughter @jaekauf will rep the @usfreestyleski @usskiteam and go for gold in moguls in one month. #WinterOlympics are coming to @NBCOlympics in only ONE. MORE. MONTH #radmom

Like Scott, Patti is proud that her daughter followed her footsteps into moguls.

“She’s always had this really good balance,” she told Steamboat Today. “That’s one of the reasons she’s successful. But, once she decided she was going to go do this, she was set on being the best moguls skier in the world.”

Patti told The She Network, part of The Women’s Sports Foundation, that she can barely breath when she watches Jaelin race.

“I am literally down on the ground on all fours,” she said. “I can’t even watch it. When you are an athlete, you are doing something, you are in the gate and have something to focus on and as a parent, you are just standing there.”

She told The She Network she just wants her daughter to enjoy the experience at the Olympics, so she can “look back at it in twenty years and say “wow, that was awesome.'” 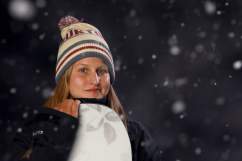 3. She Also Followed in the Footsteps of Her Brother, Skyler, Who Started Skiing at a Young Age &
Played College Football at Ithaca

While Jaelin’s parents were a huge influence on her career, it was her brother, Skyler, that she emulated the most while growing up.

“If it weren’t for Skyler, she wouldn’t be where she’s at now,” Scott Kauf told the Jackson Hole News and Guide. “He’s been a great big brother. She just aspired to follow him around, to chase him around and do what he was doing.”

Skyler told the newspaper, “Pretty much anything I was doing, she wanted to do. I forced her to play football with me in the hallways. We were 8 years old playing one-on-one football, Oklahoma drill. She was always so much smaller than me. Props to her for being a trooper.”

He was into skiing from a young age, including moguls.

“I grew up copying his every move,” Kauf told NBC. “I actually never really liked moguls when I was young, but he loved them so much and I wanted to ski with him. I eventually gave in and learned to love them as well.”

Skyler Kauf eventually played high school football in Steamboat Springs and then defensive back at Ithaca College, according to the school’s website. He graduated in 2016. One of his interceptions off the back of a receiver made the SportsCenter “Top 10” in 2015:

Jaelin told Buckrail, a Wyoming news site, “He’s the biggest fan of me. I mean, he’s my big brother and it’s always been the two of us together. He’s been a huge part of this journey and my life. He helped to raise me into who I am and he is the reason I started mogul skiing. He still pushes and motivates me everyday and every time I stand in the gate.”

Skyler told the Jackson Hole newspaper, “Everything in our household had some underlying competition. I remember when Jaelin was running in the yard, going for the winning touchdown. Then I pancaked her. I look back and I’m like, ‘Wow what a horrible thing to do for an older brother.’ I think she’s taken the good aspects of that upbringing and she’s been able to harness it and use it in her own career.” 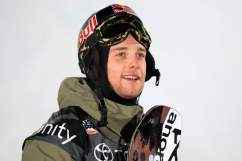 4. Kauf Was Born in Rural Wyoming, but Moved to Colorado for High School as She Began to Pursue a Skiing Career of Her Own

Jaelin Kauf and her family lived in rural Alta, Wyoming, until her she and her brother got serious about competitive skiing and began to miss school. They eventually moved to Steamboat Springs, Colorado, so they they could take part in the Steamboat Springs Winter Sports Club and go to a high school with a more cooperative schedule for skiers, Patti told Steamboat Today. It also helped bring the siblings out of their parents shadow.

“They didn’t have to be ‘the Kauf kids,'” Patti told the news site. “They could just be a couple of kids who wanted to be better skiers.”

Jaelin Kauf told The She Network the family has always enjoyed skiing together.

“My whole life, skiing is what we’ve done as a family. We have always loved being out on the mountain together. I love how easy it is, we all want to go ski the same slopes and we ski at the same speed, so we don’t have to wait for each other. It’s just fun,” she told the news site. Patti added that her favorite part of skiing is, “family, it’s one thing my family always did together and we all do it so easily.” 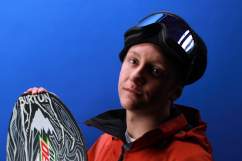 5. Her Parents, Brother, Family & Friends Make Up a Large Cheering Section for Kauf, Featuring Cutouts of Curious the George, a Nod to a Stuffed Animal She Always Carries

Kauf will have a large cheering section, as always, in South Korea. Her family is often seen at vents with large cutout Js and Curious the George heads, a nod to her stuffed animal, George Jr., that she brings with her everywhere.

“I want to be a great cheerleader, bake cookies, cheer her on and give her hugs. I don’t want to be her coach, her technician or her adviser. I just want to be her mom,” Patti Kauf told The Associated Press. “Jaelin grew up loving the sport of skiing. As parents, we always wanted our kids to do what they loved to do. And if they were going to do something, we wanted them to do it well.” 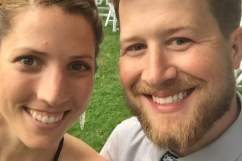