Getty Isaiah Thomas is on the move again, and will be wearing a Lakers uniform.

Just when you thought we were headed for another boring trade deadline, the Lakers and Cavs created some excitement. ESPN’s Adrian Wojnarowski reported the Lakers have acquired Isaiah Thomas, Channing Frye and a protected 2018 first round pick from the Cavaliers. Cleveland is receiving Jordan Clarkson and Larry Nance in return.

Cleveland is sending Isaiah Thomas and Channing Frye to the Lakers for Clarkson and Nance, league source tells ESPN.

While Isaiah Thomas is the headline of this trade, the bigger story is the Cavs may have just helped the Lakers clear even more cap space that could be used against them as the Lakers attempt to sign LeBron James this summer. ESPN’s Brian Windhorst reported the Lakers are now able to sign two max players this summer in free agency. Thomas is only signed through this season, and the Lakers will likely try to entice James by pairing him with another free agent during the 2018 free agency period. Expect rumors of James teaming up with Paul George in Los Angeles to heat up.

Thomas is making $6.2 million this season, and is on the final year of his deal. The point guard is expecting a big pay day, but it will be interesting to see what teams do with his recent injury. Thomas has not looked like the same player he was in Boston since returning to the floor, as he is still working towards being back at 100 percent.

The move gives the Lakers options with Thomas as they are not committed beyond this season. Los Angeles could look to bring him back if they are not able to attract other marquee free agents they are targeting. The Lakers also added another first round pick, albeit protected, to continue adding more young pieces to their core. ESPN’s Ramona Shelburne reported the Lakers plan on keeping Thomas and Frye, but she likely meant for the rest of the season.

We have Thomas projected to be in the starting lineup, but it is important to keep in mind the Cavs had been easing him back into the lineup. Thomas is only averaging 27 minutes a game in the 15 contests he played in this season. This is down from the nearly 34 minutes a game he was averaging last season in Boston. The Lakers could opt to play Thomas with Lonzo Ball in the backcourt once the rookie point guard is healthy again. L.A. could also choose to bring Thomas off the bench as he continues to return to full strength. Thomas is averaging 14.7 points and 4.5 assists this season. He is shooting just 25 percent from the three-point line, down from his career average of 36 percent.

ESPN’s Ohm Youngmisuk reported the Lakers are emphatic about their desire to keep Ball as the point guard.

Magic Johnson and Rob Pelinka make it clear that Isaiah Thomas will play for the Lakers and they can envision IT playing alongside Lonzo Ball for long stretches. Magic says Ball is “our starting point guard. That hasn’t changed but we also value what IT can bring to this team — scoring punch” and emphasizes it’s about how many minutes guys play, not who starts. Magic says Thomas can mentor Ball too. 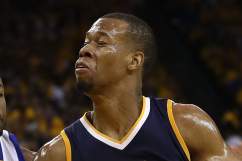