Maame Biney has made history as the first African-American women’s speed skater to qualify for the Olympics, but all of this may not have been possible if it were not for the sacrifice of her father, Kweku Biney. The Biney family story began in Ghana, and eventually found its way to the United States after Kweku hitchhiked to Europe. Maame’s skating dream began as the result of a spontaneous reaction by her father to take her to skating lessons after seeing a sign.

Now, Kweku is holding a sign of his own at the 2018 Winter Olympics which reads “Kick some hiney Biney.” His daughter has done just that, and has become one of the stars of the 2018 Olympics thanks to her infectious happiness. Kweku admitted he was nervous when he first took Maame to the rink.

“The very first day she got on the ice, I was like, ‘Ooh, what did I get myself into?’ ” Kweku told The Washington Post. “I thought this girl was going to fall down, break open her head and blood all over the place. But you know, that didn’t happen.”

Meet Maame’s biggest fan, her father Kweku, and the family that supports the speed skater.

1. Kweku’s Journey to America Began With Him Hitchhiking to Spain From Ghana

Kweku is originally from Accra, Ghana, a place he left in the 1980’s. According to CNN, Kweku began hitchhiking through the Sahara Desert before landing in Alicante, Spain, about 2,300 miles away from his home in Ghana. He then went all over Europe, living in places like France, Sweden, Denmark and Norway. Kweku had long targeted the United States as his final landing spot, but it took him a while to get there.

“I was just fearless,” Kweku told the Los Angeles Times. “I could go anywhere by myself. I wasn’t afraid of anything.”

According to CNN, Kweku finally saved up enough money for a plane ticket to the United States in 1984, and settled in Hyattsville, Maryland. This was long before the birth of his daughter, and Maame would not visit her father in the States until 2005.

2. A Trip to J.C. Penny’s With Her Father Played a Part in Maame Wanting to Move to the United States

Major Dad Goals One Day. Maame Biney's dad is creative with these signs, I swear. Love everything about it. pic.twitter.com/lOs3yF98ho

By Day 2 in the United States, Maame was begging her father to stay. Kweku believes it was a trip to J.C. Penny’s that helped make it love at first sight for his daughter, after Maame was home sick as soon as he picked her up from the airport.

“The first store we went into was JCPenney,” Kweku told CNN. “This girl saw how big the store is. She was just running all over. ‘Daddy, I like this one. No, no, daddy, I don’t like this one. I like that thing over there. I just folded my arms, stood up and just watched her just run back and forth. She got tired and I just went and bought her a few things. She stopped crying, and that was it. The following day, this girl told me, ‘Daddy, I’m not going back to Ghana.'”

Maame does not refute her father’s retelling of their first shopping trip, but she admits she does not remember the infamous J.C. Penny’s visit.

“I was 5 and I don’t really have the best memory,” Maame told the Los Angeles Times.

3. Maame Began to Skate After Her Father Saw a “Learn to Skate” Sign

Maame’s ice skating journey began after her father saw a sign posted that read “Learn to Skate”. He asked his daughter if it was something she wanted to try. Maame was open to learning to skate, but Kweku explained to CNN that his daughter did not understand what it meant.

“I don’t think she really understood what I’m saying because she had never seen ice before,” Kweku told CNN. “I was really scared because I thought she was going to fall and then break her head open because where we are from, there’s no ice. The only thing icy there is the cold beer.”

Kweku was skeptical as to whether his daughter would stay with skating, until he overslept on the morning of the third scheduled training session. Maame woke up her father, so she could make it to the rink.

“She was 5 years old. She said, ‘Daddy, it’s Saturday morning. We have to go!’ and I was like, ‘Oh man, I thought she was going to be sleeping,’ Kweku told CNN. “She wasn’t. She woke me up. And then we went, and I said, ‘OK.’ I didn’t miss any time anymore. She’s been running away with this thing ever since.”


4. Maame Was Born in Ghana Where Her Mother & Brother Still Live

GettyMaame Biney speaks regularly with her family in Ghana.

Maame may have moved to the United States, but she still keeps in touch with her family. According to the Los Angeles Times, her brother Nana Kojo is 15, and lives with their mother in Ghana.

“I talk to her about every week,” Maame told the Los Angeles Times. “And I talk to my brother too. His voice has gotten so deep! Ohmygosh! He’s probably taller than me now! Darn!”

It is now a bit easier for Maame to stay in touch, as she is the proud owner of a new phone. Her father waited until she turned 18 to give her a cell phone, meaning she had to check her Instagram account on a computer as she gained thousands of new followers after qualifying for the Olympics.

Maame explained to Team USA that the phone was a “birthday present, good-job present, keep-me-updated present” from her father.

According to CNN, her parents are separated, but Maame still remains in contact with her mother. Maame noted to The Washington Post that she loves both countries.

“I was born in Ghana, so I am Ghanaian,” Maame explained to The Washington Post. “But I identify myself as American, because I’m here to represent America and do great things for America.”

5. Maame Misses Her Mother, But Is Grateful For Her Father’s Sacrifices

“For me, it was very, very hard. It was a long journey,” Kweku told The Washington Post. “I had to sacrifice so many things. The most important thing was always my pocketbook. . . . But to me, it wasn’t a problem. I’m not too concerned about that. If I have it, I just spend it on her.”

It is something that is not lost on Maame, who is full of joy and thankfulness for earning her way to the Olympics. <a href="http://“I’m like, ‘Holy cow, I have taken my dad for granted for at least five years. I need to not do that,’ ” she said. “Why? Why would he spend so much money on a sport where you don’t know what’s going to happen? You can break an ankle in a moment’s notice, or you could not make the team. Why would my dad spend all that money for this moment?" Maame spoke with The Washington Post about watching her father put her first for so many years.

“I’m like, ‘Holy cow, I have taken my dad for granted for at least five years. I need to not do that,’ ” Maame explained to The Washington Post. “Why? Why would he spend so much money on a sport where you don’t know what’s going to happen? You can break an ankle in a moment’s notice, or you could not make the team. Why would my dad spend all that money for this moment?”

Just as she is thankful for her father’s dedication, she admits it is not easy being away from her mother. The most obvious example is speaking to her father about dating.

“I like guys, and my dad, I’m always going to be his little girl, and I think it’s a really awkward situation when you’re like, ‘Hey daddy, I like this guy. What do you think and stuff?’ Maame explained to CNN. “It’s really hard to talk to him about it because he’s like, ‘No, you’re going to get married when you’re 50 years old.’ All right, dad. OK. I see how it is.” 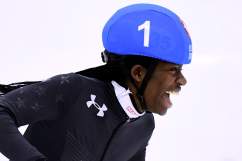 Read More
speed skating, Winter Olympics 2018
Maame Biney's father was the one to take Maame to her first skating lesson. Now, Kweku Biney is watching his daughter in the 2018 Olympics.