Madison Chock and her ice dancing partner, Evan Bates, are dating. After much speculation and some gossip, the two have decided to share their love with the world, confirming that they are, indeed, a couple.

“Skating together is something that we love doing, and we love doing it together. Now, we’re together on and off the ice and it makes it even more powerful. It feels completely genuine and real … it brings us closer together every day,” Chock told NBC.

1. They Started Skating Together in 2011, But Have Never Medaled in the Olympics

First Free Dance practice in the main rink and it was awesome ?

Chock and Bates each skated with different partners before finding each other in 2011. Bates was paired with Emily Samuelson (the two competed in the Vancouver Winter Olympics together) and Chock previously hit the ice with Greg Zuerlein.

After suffering an achilles injury, Bates was sidelined and ended up needing a new partner. Chock was also left without a partner when Zuerlein decided to retire.

“When I started skating with Madison, it definitely was different. When you skate with someone like I did with Emily for so long, it’s like putting on a glove. Now I’m trying on a new glove. I understand the amount of work we have ahead of us, but it’s refreshing and exciting,” Bates told the Ice Network back in 2011.

Flash forward seven years, and the two have found much more than a professional partnership (they actually started falling in love in 2015, according to Today).

“We just really fell in love on the ice and grew closer together,” Bates told Us Weekly in September.

The duo competed in the Sochi Winter Olympics, but ended up finishing in eighth place. This year, they are hoping to reach the podium.

2. They Had Their First Date in High School

Chock, 25, and Bates, 28, have known each other for several years. In fact, the two went on their very first date on Chock’s 16th birthday. The duo enjoyed dinner at popular restaurant chain Bahama Breeze, but didn’t pursue a relationship.

“We were like, high school sweethearts who sort of, meandered apart. And then found each other years later,” Bates told Us Weekly.

Things changed significantly last year when Bates opened up to Chock and told her how he felt about her. It was a risk, but Bates totally went for it.

“Well, I pretty much told Maddie that I loved her. Last year I told (her) how I really felt and that changed things a lot. We’d known each other for more than 10 years. We actually went on a date for her 16th birthday nine years ago. And here we are so many years later, skating together, at the Olympics together,” Bates told Today.

3. They Have Great Chemistry & Speak Very Highly of One Another

Whoever said laughter is the best medicine was totally right. #FridayFeeling

An ice dancing partnership is made that much stronger when two people have excellent chemistry, and that’s something that is evident when watching Chock and Bates dance.

“I’ve always had great chemistry with [Bates]. We’ve always gotten along so well. Skating together is something that we love doing, and we love doing it together. Now, we’re together on and off the ice and it makes it even more powerful. It feels completely genuine and real. It makes training so much more fun and it brings us closer together every day. We’re working together, working towards the same things. When you’re doing that with someone that you love, it really is so much more meaningful,” Chock told NBC.

Both Chock and Bates have nothing but incredible things to say about one another.

“I love her personality. I love her zest for life. You can just see it when she walks into a room,” Bates told Us Weekly.

“What don’t I love about him? He’s so smart. He’s one of the smartest people I have had the pleasure of knowing,” Chock told the outlet.

4. They Don’t Have Any Immediate Plans to Marry

Although they’ve known each other for nearly a decade and have been romantically linked for over a year, Chock and Bates don’t have any immediate plans to tie the knot. They both feel that they have found “the one,” according to Us Weekly, but they are just living in the moment.

The two have been very focused on training. When they have a night off, they enjoy staying low key.

“When we’re training, we sort of lead kind of quiet lives. We stay home a lot and we go to bed early,” Bates told Us Weekly.

The two live in Michigan and are the proud parents of two dogs, Stella and Henry.

“Our dogs look like us. My dog is blonde and has curly hair, her dog is black and has, like, really distinct eyebrows,” Bates told Us Weekly of their toy poodles.

You can see a picture of Stella (blonde haired) and Henry (black haired) below.

Chock previously dated fellow ice skater, Deividas Stagniunas, from Lithuania. According to a 2016 post on the Team USA website, the two had been together for six years.

As far as how they met, “Chock explained that it happened when ‘he moved to Michigan and we began training together. We became quick friends and loved spending time together.'”

Stagniunas competed in the 2014 Winter Olympics in Sochi but didn’t medal.

While Chock was dating Stagniunas, Bates had spoken out about looking for love.

“I look for someone who I enjoy spending time with. Apart from physical attraction, I think companionship is important if you want it to last,” he told Shape Magazine.

It’s unknown exactly when or why Stagniunas and Chock split. However, it looks like they have both moved on. According to his Instagram page, it appears as though he is dating ice dancer Alissandra Aronow. 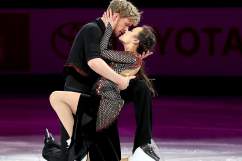 Read More
5 Fast Facts, Relationships, Winter Olympics 2018
Madison Chock and Evan Bates are dating. The two fell in love on the ice and having been romantically linked for about a year.