Getty Mirai Nagasu competes in the Ladies Short Program during the 2018 Prudential U.S. Figure Skating Championships at the SAP Center on January 3, 2018 in San Jose, California.

American figure skater Mirai Nagasu did something in PyeongChang that no other U.S. woman has done before her: Land a triple axel in the Olympics.

The triple axel is a maneuver that only two American women had previously landed in any international competition. None had done so in the Olympics. Nagasu was expected to make two attempts at landing the triple axel in the 2018 Winter Olympics in South Korea. Three and a half rotations put her in Olympic history.

She delivered, landing the triple axel at the beginning of her team program on February 11 on her first try. You can watch it here:

As the Associated Press describes the jump’s difficulty: “The triple axel is considered one of the hardest jumps because it requires tremendous strength and the ability to rotate quickly. Skaters lead into the jump head-on, rather than backward, increasing the level of difficulty because they must do 3½ revolutions before landing.”

1. Mirai Nagasu First Landed the Triple Axel in Competition Last Fall Before Landing One in PyeongChang

Nagasu’s Olympic triple axel was a long time coming. She first emerged on the U.S. figure skating scene in 2008, when she won her first U.S. Championship title at 14-years-old. “I’m super happy to feel my teammates’ support,” Nagasu said after she nailed the triple axel. “…That was a lot of excitement. And this is why we are here to be part of Team USA and to support each other. This is really cool…to nail that triple axel, I tripped a few times going into it because I was so nervous.” But she said “it was really special for me” that she decided to just go for it and succeeded.

SHE GOT IT! @mirai_nagasu is now the first American woman to land a triple axel at the #Olympics! #WinterOlympics pic.twitter.com/ZfD4C5iHlf

Mirai Nagasu first landed the triple axel in competition in only September 2017 at the U.S. International Figure Skating, according to Team USA, which quotes her as saying she didn’t pause to smile, thinking, “OK, Mirai, not the time. Regroup. That music doesn’t stop, or else I would do a mini dance if I could.” How big of a deal is this? Only eight female skaters in the world have ever landed the jump during international competition, and only two have done so in the Olympics (neither of the latter are American), according to ESPN.

Nagasu didn’t hold back from expressing pride that she completed the jump, telling TeamUSA, “You should make a big deal out of it. because I’m one of three (women) to land it in the U.S. and I’m really proud of that fact. I think it’s something that I can really use to my advantage and I hope to be rewarded for it.”

For Mirai, there was a bit of redemption at hand when she made the U.S. Olympic team as she was passed over for one of the three spots in Sochi even though she placed third at the U.S. Championships that year. Team USA says she has the jump in both programs she will skate during the PyeongChang Olympic games. 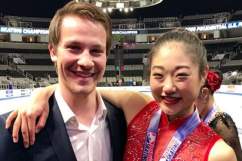 2. Tonya Harding Was the First American Woman to Land a Triple Axel in Competition But Never in the Olympics

Tonya Harding did it first among American women in a competition, but never in an Olympics.

The now notorious figure skater first became famous for her ability to land the triple axel. However, Harding wasn’t able to successfully perform the trick during the Olympics, where her performance was overshadowed by the knee-capping of her figure skating rival, Nancy Kerrigan. The knee-capping episode was featured in a television documentary and the Hollywood movie, I, Tonya.

According to The AP, Harding was able to land three triple axels in competitions before her career ended, the first in 1991 during her free skate in the nationals competition. Even more impressively, Harding landed two triple axels in a single competition in 1991 at Skate America, becoming the first woman in the world to perform that feat (however, Japan’s Mao Asada later landed three in Vancouver.)

3. Kimmie Meissner Was the Second American Woman to Land a Triple Axel in Competition, Also Not in the Olympics

There was a second American figure skater who landed the triple axel in non Olympic competition: Kimmie Meissner. However, she never broke through with a dazzling performance in the Olympics. Still, Meissner could claim to have done something only Harding did before her when it comes to landing a triple axel in competition.

“Kimmie Meissner landed a triple axel during her free skate in the U.S. Figure Skating Championships,” The Associated Press reported in 2005. She won the bronze medal in that competition; she was only 15-years-old and competing against the likes of Michelle Kwan.

Now 28 and living in Baltimore, Maryland, Meissner works as a youth coach and mentor, according to The Baltimore Sun.

According to NBC, the jump was “named for its creator, Axel Paulson, who invented the jump in 1882.” It’s the “only forward-facing jump in figure skating,” NBC reports.

4. Two Japanese Women Have Landed the Triple Axel in the Olympics

Two women – both from Japan – have landed triple axels during past Olympics. That makes Nagasu the third woman in history to do so. According to The Washington Post, the women to have done so are Midori Ito and Mao Asada.

A few female skaters outside the United States have landed triple axels in other competitions than the Olympics. They are Yukari Nukano of Japan, Ludmila Nelidina of Russia, Elizaveta Tuktamysheva of Russia, and Rika Kihira of Japan.

5. Videos Show Mirai Landing Triple Axels in Practice & The Stones on Her Dress Are Kept Light

Mirai built anticipation that she would attempt a triple axel by posting videos of her landing them in practices. According to TeamUSA, Harding and Meissner didn’t practice the jump as much as Nagasu does because it’s so “punishing.”

She told TeamUSA that she landed the jump 80 percent of the time during practices in the fall, saying, “The more reps that I can do, the better I feel and the more confidence I gain from it. Every time I do a jump, I learn something new. I’ve been told by my coach that I need to become comfortable with toning down the reps, but I would say I do at least 10 per day – but way more actually.”