Shani Davis, the much decorated, pioneering Olympic speedskater, may have been the inspiration behind the cartoon character “Frozone” who appears in the beloved Disney Pixar movie, The Incredibles.

Davis caused controversy when he tweeted before his 5th Olympics in Pyeongchang that the U.S. team had “dishonorably” chosen the American flag bearer through a coin toss. According to CNN, Davis and Olympian Erin Hamlin initially tied for the honor. “I am an American and when I won the 1000m in 2010 I became the first American to 2-peat in that event. @TeamUSA dishonorably tossed a coin to decide its 2018 flag bearer. No problem. I can wait until 2022. #BlackHistoryMonth2018 #PyeongChang2018,” Davis wrote on his Twitter page.

Was Frozone modeled on Shani Davis? That hasn’t been confirmed, but a lot of people have noticed the resemblance. “Davis is rumored to have inspired the character of Frozone, an African-American superhero who can create and control ice, from the Disney Pixar movie The Incredibles,” reports NBC.

On Facebook, The U.S. Embassy Belize claimed that Frozone was based on Shani Davis, writing, “In the 2004 Disney/Pixar film The Incredibles, the character Frozone was designed after Shani. Frozone is able to manipulate water molecules in the air and freeze them. Frozone – as part of the character’s back story – had attempted to represent the United States in the Winter Olympics but was rejected on account of his super abilities. It would have granted him a tremendous but unfair advantage. And super heroes never cheat.”

Shani Davis is age 35. That means that he would have been in his early 20s when the Disney movie came out. However, by 2004, he had already made the Olympic short track team in Salt Lake City and was a world champion in speedskating, according to his website biography.

Shani is the first black athlete to win an individual gold medal at a Winter Olympics, but he didn’t achieve that honor until 2006. However, the book Disney Voice Actors: A Biographical Dictionary says that Frozone swings his arms “in an unusual manner when he skates, a move copied from the Olympic gold medalist skater Shani Davis.”

Fans have noticed the resemblance between Frozone and Shani Davis.

Shani Davis is actually Frozone from the Olympics pic.twitter.com/TfvAjKVqu2

I'm just saying I have never seen Shani Davis and Frozone in the same place… pic.twitter.com/SeN7dB7z61

Shani Davis reminds me of Frozone from the Incredibles pic.twitter.com/e413AZtdOO

The Disney website describes the plot of The Incredibles this way: “Known to the world as superheroes Mr. Incredible and Elastigirl, Bob Parr and his wife Helen were among the world’s greatest crime fighters, saving lives and battling evil on a daily basis. Fifteen years later, they have been forced to adopt civilian identities and retreat to the suburbs to live “normal” lives with their three kids, Violet, Dash and Jack-Jack. Itching to get back into action, Bob gets his chance when a mysterious communication summons him to a remote island for a top secret assignment.”

You can read more about Shani Davis’ biography here: 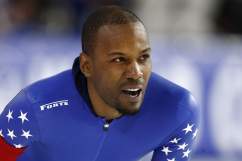