It has been a good week for Anfernees as Anfernee Simons declared for the 2018 NBA draft just days after Anfernee Hardaway was named the Memphis head coach. Simons’ parents were avid Orlando Magic fans, and named their son after Penny. Simons knows Hardaway more for his signature Foamposite shoes than his playing days given Hardaway’s best basketball occurred before he was born.

During a basketball tournament last fall, my phone began buzzing as news broke that a high schooler could enter the 2018 NBA Draft. The 2005 draft was the last class to feature true high school players, and Anfernee Simons is in a different situation than the high school-to-pros era we grew accustomed to seeing over a decade ago. In a November 2017 interview with ESPN’s Jonathan Givony, Simons admitted he was considering entering the NBA draft, which caused a ripple effect throughout the basketball community.

Simons’ situation shows the NBA is at a crossroad with both high school and college basketball. So much so, NBA commissioner Adam Silver is exploring the idea of creating an “alternate path to the NBA” per ESPN’s Brian Windhorst.

A plan is expected to include the NBA starting relationships with elite teenagers while they are in high school, providing skills to help them develop both on and off the court. It would ultimately open an alternate path to the NBA besides playing in college and a way 18-year-olds could earn a meaningful salary either from NBA teams or as part of an enhanced option in the developmental G League, sources said.

While this may the future for high school basketball, this is not the world Simons lives in, and Simons decided to declare for the draft with his name firmly in the first round discussion. Simons is projected to go No. 16 in Heavy’s latest NBA mock draft, while he is No. 19 in ESPN’s mock draft.

How can Simons declare for the NBA draft? Players are eligible under two conditions: they are at least 19 years old and a year removed from high school. Simons graduated from Edgewater, an Orlando high school, and enrolled at IMG Academy to play on the post-graduate team during his gap year. Simons will turn 19 just a few weeks before the draft fulfilling both requirements.

Knowing very little about Simons, I went down to Bradenton, Florida to meet the player who had become the talk of hoop heads across the country, and see him play for myself.

Here’s what I found out.

Lil’ Penny was created by Nike during the 1990’s to be the hype man for the NBA player who was not keen on talking up his accomplishments. Like his namesake, Simons is soft-spoken, and far from effervescent when describing himself. It is worth noting Simons was teammates with Jayden Hardaway, Penny’s son, at IMG Academy. Upon meeting Simons, I immediately remembered how people described Tracy McGrady during his early years, calm and soft-spoken. On the court, Simons is cold-blooded, and unlikely to show much emotion even if he just dunked on an entire team.

“[I’m an] aggressive scorer who can also pass a little bit,” Simons noted when asked to describe his game. “I can use my scoring abilities to my advantage to be able to pass.”

After the ball is tipped, there is no timidity from Simons. During the game I watched, Simons wanted to dunk everything, looking to use his athleticism to challenge defenders inside the paint. Simons jumper was also on point, something he has been working on after recovering from a hand injury. When the lights turned on, Simons showed aggressiveness, and a desire to play defense.

IMG Academy’s post-graduate team is an option some players take for a fifth high school year to improve their games, get stronger and attempt to get better college offers. Thon Maker was in a similar situation in 2016, and declared for the NBA draft after his post-graduate year in Canada. While IMG has become known for transforming high school football and developing elite-level tennis players, the basketball program is on the rise, and has experience working with top players like Simons. IMG is familiar with the process as Jonathan Isaac recently went through a similar decision. Ultimately, Isaac opted not to enter the draft coming out of IMG, and played one season at Florida State before being drafted by the Magic with the No. 6 pick in 2017.

Coach John Mahoney worked all over the country with top programs like Michigan and West Virginia prior to taking over IMG’s post-graduate team. Mahoney detailed what makes Simons so attractive as a prospect.

“He’s a dynamic player,” Mahoney explains. “He’s a big scoring guard with a high IQ. He can shoot it off the bounce. He can shoot it with his feet set. He can get to the rim. He can do it in multiple ways, and is not just a one-dimensional player.”

Simons was leaning towards going to college when I visited IMG during the holiday season, but the NBA opportunity became too good to pass up. After decommitting from Louisville amidst the FBI investigation, Simons was considering college offers from Tennessee, Minnesota, Florida, NC State, SMU, Dayton, UCF and Illinois.

“After discussing the matter with my parents, I have decided to forgo the opportunity to play in the NCAA and to instead enter the NBA draft,” Simons told ESPN. “I am very thankful for the support I received at IMG Academy and from the NCAA coaches who recruited me. I am ready and excited to pursue my dream of playing in the NBA.”

The 2018 class if full of big men opening up the opportunity for guards like Simons to go in the first round. At the top of the draft, Real Madrid’s Luka Doncic, Oklahoma’s Trae Young, Alabama’s Collin Sexton and Kentucky’s Shai Gilgeous-Alexander have emerged as the favorites to be the top guards selected in the lottery. While some of the top prospects have been able to play during March Madness, Simons has been playing in gyms across the country for IMG. The guard will have an opportunity to shine in upcoming games like the Nike Hoop Summit and Jordan Brand Classic.

How does Simons’ game translate into the NBA? There are a number of teams who are projected to have multiple first round draft picks including the Los Angeles Clippers, Phoenix Suns, Chicago Bulls, Philadelphia Sixers and Atlanta Hawks. These teams are in a position to use a first round pick on Simons, and their draft capital allows them to exercise a bit more patience in Simons’ development.

“He could be a hybrid,” Mahoney explained. “He can handle like a point guard. Shoot it like a shooting guard. He’s multi-talented.”

Given his size, Simons is likely to start out as a point guard at the next level. Regardless of where Simons lands, what has become clear is a new pathway to the NBA is emerging, and we are likely to see more players follow Simons lead in the years to come.

Now, if we could only bring back Lil’ Penny. 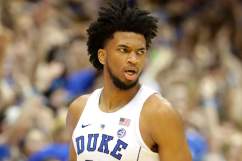