Getty Mikal Bridges is expected to be a lottery pick in the 2018 NBA draft.

Jalen Brunson and Mikal Bridges led Villanova to a Final Four run, and NBA scouts have taken notice of the Wildcats duo. Brunson may have won the College Basketball Player of the Year, but it is Bridges that is likely to be drafted higher.

Heavy has Bridges going No. 10 in our latest mock draft, which is the same spot ESPN draft analyst Jonathan Givony has Bridges.

Bridges is an easy player to slot on almost any NBA roster, thanks to his multipositional defensive versatility, 3-point shooting and role-player potential. He isn’t as gifted a shot creator as you’d like from a top-10 pick…

Sports Illustrated’s Jeremy Woo has Bridges ranked No. 8 on his big board.

Viewed as one of the safer prospects in the draft, Bridges couples great defensive instincts and ability with quality three-point shooting. While he sometimes struggles to create his own shot off the dribble, a second half three-point barrage in a NCAA tournament blowout of Alabama was a nice reminder that Bridges possesses some offensive upside. His NBA fit as a supporting piece should be similar, and his impactful perimeter defense is a safe bet to translate thanks to his 7’0” wingspan and ability to guard several positions. There’s not a team in the league that can’t use a player with his strengths, and he should be ready to contribute sooner than later.

Bridges also has earned praise from current NBA players like Kevin Durant, who called Bridges his favorite 2018 prospect on The Bill Simmons Podcast.

Heavy has Brunson going outside the first round in our latest mock draft. ESPN has Brunson being selected with the first pick of the second round, while Sports Illustrated ranked Brunson No. 34 making him an early second round pick.

Here’s a look at my draft profiles for Bridges and Brunson.

Strengths: Bridges is as complete of a player as NBA teams will find in the draft. Upperclassmen are often looked down upon as prospects, but Bridges shows the benefit of drafting a player with more than one year of college basketball experience. He will enter the league ready to contribute right away.

Bridges has developed into a prolific three-point shooter shooting 43.6 percent from the three-point line this season. He is also a threat to hurt teams off the bounce, and capable of hitting mid-range jumpers. Bridges is the ultimate three-and-D player at the next level with a 7′ wingspan allowing him to disrupt passing lanes and block shots. Bridges has one of the highest plus/minus numbers of any college player I have looked at coming in at 12.9. Bridges numbers have gone up each season at Villanova, and there is no reason to think he will not continue to get better in the NBA.

Weaknesses: Bridges ended the regular season on a hot streak with 20 plus points in four of Villanova’s last five regular season games. Heading into the Final Four, Bridges only scored more than 16 points one time in the NCAA tournament. Bridges is one of the few upperclassmen who is projected to be a lottery pick. Bridges is a junior and 21 years old which can sometimes be held against players in the draft. Bridges will be compared against freshman who teams often gamble on based on their upside.

The Villanova forward is known as a scorer, but will need to show he is capable of getting his teammates involved. Bridges averaged just 1.9 assists per game this season.

Summary: Bridges has a good chance to land inside the top 10 of the 2018 NBA draft. The Villanova forward is the ultimate three-and-D player at the next level, but can do more than this title suggests. His skill set along with his length makes him a great fit at the next level. Bridges has improved each season at Villanova, and worked himself into being a lottery pick.

Strengths: Brunson helped return Villanova to one of college basketball’s top programs over the last three years, including a national championship. Brunson is a knock-down shooter (41.4 percent from three) which has made him one of the best offensive players in college basketball. Brunson is also a solid distributor, averaging 4.6 assists per game.

Weaknesses: Brunson struggled in Villanova’s Elite 8 matchup against Texas Tech’s Zhaire Smith. Smith represents the kind of players Brunson will face in the NBA, i.e. long and more athletic players. Brunson struggled to score at the rim against Smith, and managed to reach 15 points thanks to seven points at the free throw line. Brunson lacks athleticism, and the fear is Brunson’s massive scoring ability he displayed in college will greatly diminish at the next level.

There are questions as to whether Brunson will be able to score at the rim in the NBA. Brunson will also be forced to defend bigger and more athletic players at the next level.

Summary: Brunson is on the fringe of being a first round pick, but as of right now sits in the early second round. Brunson will likely be competing with other upperclassman for the last few picks of the first round. As of now, Brunson is a solid back-up point guard at the NBA level with his shooting and playmaking ability getting him on the floor. 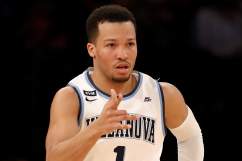