UMBC pulled off the biggest upset in sports history by becoming the first men’s basketball No. 16 seed to defeat a No. 1 seed. UMBC guard Jarius Lyles has become the face for one of college basketball’s most impressive underdog stories. During the 2017-18 season, Lyles averaged 20.4 points, 5.5 rebounds and 3.5 assists. The biggest game of his career came against Virginia when Lyles had 28 points in UMBC’s win.

Learn more about the face of UMBC basketball.

1. Lyles Had an Opportunity to Transfer to Florida & Kansas

Lyles’ path to UMBC was full of surprises. He initially attended VCU where he played under Shaka Smart, but transferred to Robert Morris after one season thanks to a lack of playing time. His stint at Robert Morris only lasted one semester, and he never played on the team.

Lyles transferred to UMBC where NCAA rules stipulated he had to sit out one season before playing. According to the Charlotte Observer, he is now a graduate student after already earning a psychology and sociology degree. ESPN reported Lyles had opportunities to transfer to a number of bigger programs including Kansas and Florida. Lyles play at UMBC caught the eye of some of college basketball’s blue bloods, and he would have been a graduate transfer allowing him to play immediately.

The UMBC guard explained to The Washington Post why he decided to finish his college career in Baltimore.

“I never really wanted it though,” Lyles told The Washington Post. “I can’t say I didn’t think about it. But the job here wasn’t finished. I couldn’t imagine leaving my teammates and, to be honest, I thought about legacy. I feel like I’m going to leave here having made a mark. I couldn’t have done that someplace else in one season. I felt like if I left, I’d be letting people down. I wasn’t going to do that.”

“I had talked to Jairus and his mom about it late in the season,” Odom told The Washington Post. “I told them I wanted what was best for Jairus. I also told them the reasons why staying here couldn’t possibly be a bad decision for him…If he’d left, he would have been just another good player at a big program who was there for one season and gone. Here, he’ll leave this spring, but he’ll have a relationship with the place and the people here forever.”

2. Lyles’ Parents Both Graduated From Virginia, the School UMBC Defeated in the 2018 NCAA Tournament

Jairus Lyles's dad, an all-Met at St Albans, had no interest in Maryland. So instead he went… to Virginia. And peep the byline pic.twitter.com/hUthKaJ1MV

When the 2018 NCAA tournament bracket was announced, Lyles’ parents had an interesting decision as UMBC was matched up against Virginia. Lyles mom and dad may have graduated from Virginia, but there was little doubt the Lyles family was pulling for UMBC to shock the world. Lyles father, Lester Lyles, played college football for Virginia. During his three college seasons with the Cavaliers, Lyles recorded five interceptions as a cornerback before heading to the NFL.

Lyles’ mother, Carol Motley, explained to ESPN that the family was pulling for UMBC.

“It was unbelievable to see them whip up on my alma mater,” Motley told ESPN. “I was part of Retriever Nation tonight.”

3. Lester Lyles, Jarius’ Father, Played in the NFL For 6 Seasons

Athletes run in the Lyles family as Lyles’ father played in the NFL for six seasons. Lester Lyles played for the New York Jets, Phoenix Cardinals and San Diego Chargers. His best season came with the Jets in 1986 when he notched five interceptions. He had 10 interceptions during his NFL career. Lyles was selected in the second round of the 1985 NFL draft.

According to Yahoo Sports, Lyles parents are divorced, and he was primarily raised by his mother. Motley told Yahoo Sports that Lyles along with his two older siblings were known as “The Four Musketeers.”

Smart, his former VCU coach, spoke with Yahoo Sports about Motley’s character rubbing off on her son.

“When he left, I told Carol, ‘If Jairus had your makeup, he would be highly successful wherever he goes,’” Smart told Yahoo Sports. “I think that’s what happened to him through humility and maturity and time. He’s grown up and become the young man his mom raised him to be.”

4. Lyles Is Expected to Get NBA Workouts Ahead of the Draft, But Most Analysts Still Have Him Going Undrafted

Pretty happy that my entire Virginia-UMBC was about the pro prospects of Jairus Lyles. Gave him a Shabazz Napier comp. Would be awesome to write about him again for Sunday. Looks like its really happening. https://t.co/RudqJLTLmE

Lyles may be low in most NBA draft rankings, but his play in the NCAA tournament has him on NBA team’s radars. Lyles’s strength is his scoring, but he primarily plays off the ball at UMBC. There are very few 6’2″ shooting guards in the NBA, and scouts also have questions about his defensive ability.

The thing is, Lyles’ performance didn’t appear to be particularly fluky or unsustainable, as he also had 31 points against Arizona earlier this year and went off for 27 against a very strong Vermont team in the American East tournament championship game. He certainly looked like he belonged on the same court physically with the an ACC opponent in terms of size and athleticism, and his career trajectory — having played at vaunted DeMatha Catholic High School and Team Takeover on the Nike EYBL AAU circuit — suggests the same.

Lyles’ ability to create offense off the dribble stood out all night against the No. 1 defense in college basketball, as he was able to turn the corner repeatedly and force opponents to rotate and recover toward him, giving him a plethora of options. He is an outstanding ball handler, with an array of flashy moves, and is blessed with a quick first step, the ability to get low to the ground and change speeds forcefully. Synergy Sports Technology ranks him in the 90th percentile in isolation scoring among all of college basketball, and his ability to create space off jab-steps, crossovers and step backs will easily allow him to make money at the professional level…

NBA scouts have some questions about Lyles’ position, as he plays off the ball a lot for UMBC at 6-2 and has posted close to a 1-1 assist-to-turnover ratio over the course of his college career.

Givony reported Lyles has not received an invite to the Portsmouth Invitational Tournament, a showcase for the top 64 seniors in the country, but expects this to change before the event.

According to ESPN, Lyles was a top 100 recruit coming out of DeMatha Catholic High School where he played with NBA star Victor Oladipo his freshman season. Lyles won back-to-back state titles his freshman and sophomore seasons. According to Rivals, Lyles was a three-star recruit with two offers from VCU and Oklahoma State. Oladipo was watching his former teammate during UMBC’s upset victory, and gave Lyles a shout out on Twitter.

When you look at Dematha’s roster Lyles’ freshman season, it is no wonder they won the title. According to The Washington Post’s Dan Steinberg, the team also included Quinn Cook, Jerami Grant and Jerian Grant. 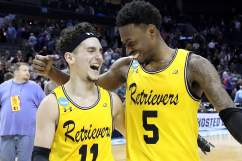