Getty Bucknell has a chance to play Cinderella during March Madness.

One of the best things about March Madness is the upsets and unpredictability of the tournament. While it is impossible to see everything coming in college basketball this time of year, there are a few teams that have the makings of being a Cinderella during March Madness.

There are certain principles most of us know are true when picking upsets. Do not pick a No. 16 seed to win, as they have never defeated a No. 1 seed. Pick at least one No. 12 seed to upset a No. 5 seed. According to NCAA.com, the No. 12 seeds win almost 36 percent of their games, a high rate for an underdog. This may tell you the seeds to identify, but it doesn’t narrow down the teams. That’s where we are here to help identify the teams that have the best chance of pulling off an upset.

According to NCAA.com, seeds 10-15 average about six upset wins in the first round every year. Before you go picking your six upsets, here is a word of caution. While we like these teams chances in the opening round, very few sleepers have a chance of making it past the Sweet 16. Picking the wrong upsets could end up costing you your bracket pool, so proceed with caution. Your Final Four picks should be full of familiar names, as the majority of upsets happen in the opening round of games. As the tournament progresses, there tends to be less and less Cinderellas.

What are you looking for in potential sleepers in this year’s tournament? A team does not need to have all of these characteristics, but some combination could be the right formula for pulling off upsets in March. Look for strong guard play, and it is an added bonus if the team has NCAA tournament experience. A team that shoots it well from the three-point line has a chance to get hot in a couple March Madness games allowing them to pull off upsets.

Watch teams from smaller conferences that have won both their regular season and conference tournaments. This indicates they were a dominant mid-major team and displayed consistency throughout the season. Have they been tested with a strong non-conference schedule allowing them to play against teams in major conferences like they will face in the tournament? Finally, allow Vegas to be your friend, by identifying matchups with narrow point spreads.

Be sure to check out our best bracket principles before making your picks as well.

Here are the teams who will wear Cinderella’s slipper during the 2018 NCAA tournament.

GettyLoyola has a good chance to make some noise in the NCAA tournament.

West Region: No. 12 South Dakota State Over No. 5 Ohio State

The Jackrabbits get both a favorable seed and draw in 2018. Ohio State has lost three of their last five games, and I like South Dakota State’s shooting to push them through to the next round.

Midwest Region: No. 13 College of Charleston Over No. 4 Auburn

Charleston won the Colonial Athletic Association, both the regular season title and tourney. Auburn is one of the weaker top seeds as the Tigers have lost three of their last four contests. Look for Charleston’s guard play to give Auburn fits making it a one possession game going into the final minute.

South Region: No. 11 Loyola-Chicago Over No. 6 Miami

Loyola heads into March Madness on a 10-game win streak, and did not lose in the month of February. Like most of the mid-major teams I like, they not only won the MVC regular season title, but followed it up with by winning the MVC conference tournament. Loyola was dominant in the title game defeating Illinois State by 16 points.

The Ramblers played against Boise State and Florida this season. Loyola pulled out a six-point road win against Florida proving they not only have what it takes to compete against the big boys, but have the talent to get an NCAA tournament victory. Given their win over Florida, Loyola is going to be one of the popular upset picks.

Loyola got a favorable No. 11 seed, and can upset Miami if they can limit their guard play. If Loyola is able to defeat Miami, look for them to make a Sweet 16 run with a winnable Round of 32 matchup against Tennessee or Wright State.

East Region: No. 12 Murray State Over No. 5 West Virginia

Murray State comes into the NCAA tournament with one of the nation’s longest winning streaks at 13 straight games. The Racers have not lost since mid-January and defeated the perennial class of the OVC, Belmont, in the conference title game by 17 points. Murray State also won the regular season title. The Racers do not have a lot of experience this season playing against big time opponents, but did only lose to Auburn by four points.

West Virginia has been prone to early exits in the past, and will be on upset alert against Murray State.

These are teams that I liked, but drew unfavorable matchups in the opening round. Look for them to keep things close, but come up just short of pulling off an upset. If you are in a non-traditional scoring system that rewards upset picks, here are a few more picks to consider.

South Region: No. 15 Georgia State vs. No. 2 Cincinnati

Georgia State was expected to be a seed line or two higher. I’m very close to picking Georgia State to upset Cincinnati straight up, but the success of No. 15 seeds is limited. I’ve had the opportunity to watch this team up close, and the Panthers have the makings of a team that can win a game or two in the tournament.

Georgia State coach Ron Hunter is no stranger to NCAA tournament success as Hunter has led the Panthers to March Madness runs in the past. Guard D’Marcus Simonds is one of the best scorers in the country, and has a good chance to be a first round pick in the 2019 NBA Draft if he returns to Atlanta for another season. Georgia State survived a poor February to find their footing in the Sun Belt tournament. The Panthers do not have a lot of quality wins, but did defeat Georgia Tech in an exhibition game for hurricane relief. Georgia State also played Ole Miss, Montana and Dayton this season.

There are just a handful of teams Bucknell matched up with that would prevent me from picking them to make a run. Michigan State is a terrible matchup for the Bison. They were upset in last year’s opening round meaning they will be locked into this game from the tip to avoid repeating the same mistake.

Bucknell won the Patriot League regular season title and followed it up by winning the conference tournament. Bucknell won the title game by 19 points, and their semifinal matchup by 31 points. The Bison come in tested with tournament experience, and can keep this one close. However, Michigan State has enough talent to make a Final Four run.

Buffalo is another team I planned on picking to pull off a few upsets, but Arizona is my pick to come out of the South. Deandre Ayton is playing at such a high level it will be difficult for Buffalo to find anyone who can match up with the future NBA big man.

Buffalo enters the NCAA tournament tested thanks to a non-conference schedule that included Cincinnati, St. Bonaventure, Syracuse, South Dakota State and Texas A&M. The Bulls have won eight of their last nine contests. Buffalo spreads the wealth with four players averaging 14 or more points. The Bulls have three key juniors that were part of Buffalo’s 2016 tournament appearance. Buffalo does not have many signature wins, but their schedule means they won’t be overwhelmed by March Madness.

Not Cinderella, But the Shoe Fits

Here are a few schools that don’t fit the traditional description of a March Madness Cinderella (double-digit seeds from smaller conferences), but have a good chance to pull off a few upsets. The majority of these schools are in a major conference, and are higher-seeded teams that have a chance to win multiple games in the NCAA tournament.

The Crimson Tide went from being a bubble team to having a Collin Sexton buzzer beater cement their tournament fate. Alabama has all the makings of a team that could go on a run, and make the Sweet 16. They played in the SEC, which is one of the deepest conferences in the country. Alabama has wins over BYU, Rhode Island, Texas A&M (twice), Auburn (twice), Oklahoma, Florida and Tennessee. Sexton showed what he is capable of in the SEC tournament, and I like teams in March that have NBA-level guard play.

Texas was one of the bubble teams that made it into the Big Dance. The Longhorns struggled down the stretch, but have enough talent to advance to the Sweet 16. Texas has wins over Butler, Alabama, TCU, Texas Tech, Oklahoma and West Virginia. The Longhorns also lost in overtime to Duke and Gonzaga.

Texas was paired with a favorable three teams at the bottom of the South region. Their opening matchup is against Nevada, and a win would likely pair them against Cincinnati. While the Bearcats are one of the most underrated teams in college basketball, this is a very difficult matchup for Cincinnati in the Round of 32.

Houston was seconds away from winning the AAC over Cincinnati. The Cougars have wins over Wake Forest, Arkansas, Providence, Wichita State (twice) and Cincinnati. Robert Gray can get buckets at will as his 18.6 points per game shows. I like Houston to get past San Diego State, and will likely face Michigan in the Round of 32. Houston against Michigan is a coin flip of a game. The Wolverines are on a hot streak after winning the Big Ten tournament, but Houston has the talent to make a Sweet 16 run. 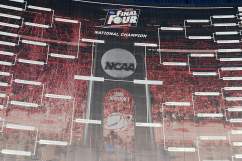