Getty Marques Townes was more than just a little excited after clinching a berth to the Elite Eight.

Marques Townes always knew Loyola Chicago was talented, but even he would admit that he’s just as surprised by the Ramblers’ NCAA Tournament run as anyone. And, more importantly, he’s having the time of his basketball life.

Townes kept this particular Cinderella dancing, draining the game-winning shot in the Sweet 16, but it’s been a long and winding road to history and headlines for the New Jersey native. Here’s everything you need to know:

He wasn’t always a ramblin’ man.

Townes started his college career at Fairleigh Dickinson, playing in 24 games as a freshman during the 2014-15 season. He averaged 9.1 ppg, 3.3 rpg and 1.6 spg, while playing 21.8 minutes per outing, but broke out during his sophomore season.

He started in all 33 games as a sophomore, helping to lead the Knights to an NCAA Tournament berth. Townes averaged 11.5 points, 3.9 rebounds and 2.7 assists per game in just over 30 minutes per contest and notched 88 total assists, while turning the ball over just 59 times. He also recorded the first game-winner of his career with FDU, connecting on the bucket against Towson on December 18, 2015 with just seconds left on the clock.

Townes is no stranger to playing with big names.

The New Jersey native played his high-school ball alongside future  NBA players Karl-Anthony Towns and Wade Baldwin IV at St. Joseph. And while his former teammates have garnered plenty of headlines and attention recently, Townes made his own mark on the squad as well.

He ranked second in school history in points (1,863) behind former Duke star and Bulls guard Jay Williams and, as a senior, led the team to its first-ever New Jersey Tournament of Champions title. He also racked up the accolades in his final season, averaging nearly 17 points, five rebounds, three assists and two steals per game.

Townes, unlike his teammates however, didn’t attract many offers from top-tier basketball programs. He was a two-sport athlete during high school and his hesitance at picking one sport over the other, left him without many options. He told the Chicago Tribune:

It was a frustrating process because I didn’t know what I wanted to do. I got to the point, I’ve got to sit down and think about what I’ve got to do. I talked to my dad, my mom, my AAU coach. I felt like it was my decision at the end of the day. My heart was with basketball, and I couldn’t give up that passion.

He signed his national letter of intent with Fairleigh Dickinson in April of his senior year and despite earning a trip to the 2016 NCAA Tournament, Townes knew it wasn’t the right fit. He’d never heard of Chicago Loyola before he visited the campus, but knew, as soon as his feet touched the ground – he’d found where he was supposed to be.

3. Townes Was a Standout Football Player in High School 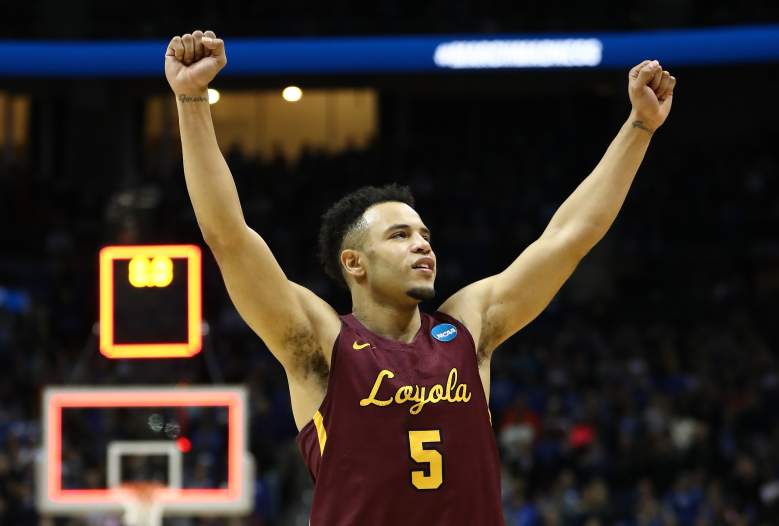 It took him some time to decide what he wanted to do.

Townes always had a fantastic jump shot, but he was also a standout football player at St. Joseph in Edison, New Jersey and, for some time, considered playing at the collegiate level. He initially quit football when he first started high school, but watching from the stands wasn’t nearly as much fun as playing and he got back on the gridiron his senior season.

“He was just such a rare athlete,” St. Joseph football coach Casey Ransone told the Chicago Tribune. “It was my personal opinion if he had stayed with football, he would have become an NFL linebacker.”

Townes started attracting attention from college programs, but most schools wanted him to take a prep year in order to bulk up his 230-pound frame. It was an attractive offer and Ransone said he “I told him his football ceiling is higher. It would have (gone) further in the end,” but Townes couldn’t walk away from the hardwood.

Still, football was always an option and when he announced his intention to transfer from Fairleigh Dickinson, Syracuse football coaches called Ransone asking about Townes. He politely declined.

4. He Sank the Game-Winning Three-Pointer in the Sweet 16

Loyola Chicago has had plenty of heroes during its NCAA Tournament run – namely Sister Jean, of course – but Townes got his own moment in the spotlight when he drained the game-winning three-pointer to lift his squad over Nevada in the Sweet 16.

Townes connected on the shot with just six seconds left to play, releasing from right in front of the Loyola bench. The shot clock, naturally, had also reached one second for maximum drama. He described the moment to media after the game, saying:

I’ll probably remember it for the rest of my life. I mean, it doesn’t really get any better than that. [Redshirt junior guard] Clay [Custer] made a great play, got downhill [and] kicked me to the corner. The [defender] came flying at me. I just gave him a little shot fake, and I shot it and it went in … that’s something you dream about.

It was a moment and a shot Townes has waited his entire career for, but he’s far from satisfied. This has been an improbable run for Loyola and the team has only gotten more confident with every final-second victory. This is, after all, why he came to Chicago.

“If you’re with a good mid-major team and you have players and coaches who love each other and have each other’s backs, you can play with the best of them — you can beat anybody,” Townes told Asbury Park Press. “You don’t have to be at a high-major school, as we’re showing right now in this tournament.”

It might be his first year in a Ramblers’ uniform, but Townes has quickly become a leader for Loyola, an experienced player and a calm presence when things get a bit dramatic in late-game situations. He, of course, proved it in the squad’s final-second victory over Nevada in the Sweet 16 – another late-moment scramble and historic run that kept this Cinderella dancing for, at least, one more game.

And while the basketball-watching community may have been surprised by Loyola’s latest upset, no one on the Ramblers roster was surprised by Townes’ performance.

He finished with 18 points including, course, the game-winning three, in the Sweet 16, but it was his leadership and his determination to spark his team that made all the difference down the stretch.

“He was a warrior,” Loyola coach Porter Moser told reporters after the game.

Townes’ teammates were quick to echo their coach’s sentiment. Clayton Custer added: “I think Marques Townes is the best player on the court tonight…I don’t even think it was close, either. … This is unbelievable. Feels like a dream.”