Shayanna Jenkins-Hernandez was the fiancee of Aaron Hernandez, the former NFLer who died by suicide in prison while serving a life sentence. Jenkins-Hernandez, 28, is a mother of one. She currently lives in Rhode Island with her daughter, Avielle, whom she welcomed with Hernandez back in 2012.

Jenkins-Hernandez was a big part of Hernandez’s life when he was playing for the Patriots and when he was on trial for murder. Not only was she accused of disposing of the murder weapon, but she was in court during Hernandez’s trial, often sitting with Hernandez’s mom, Terri.

Since Hernandez’s suicide, Jenkins sat down for an interview with Dr. Phil. She spoke about her fiance and about the life they had together. Since that time, however, she has remained completely out of the public eye.

1. She Was Engaged to Hernandez & Legally Changed Her Last Name to His Despite Never Marrying Him

Hernandez proposed to Jenkins-Hernandez on the day of her baby shower back in 2012. The last few times that she stepped into the spotlight, she was wearing the engagement ring that Hernandez gave her. It’s unknown if she still wears the ring today.

Dedicated to her man and to their relationship, Jenkins filed an official request in court to have her last name legally changed to Jenkins-Hernandez. She said that she wanted to have the same last name as her daughter. A judge approved the request in 2015, according to the New York Post.

At the time, many had wondered if Hernandez and Jenkins-Hernandez had secretly gotten married, but a prison spokesperson told the Associated Press that there was no record of a marriage.

In the recent Oxygen special called Aaron Hernandez Uncovered, Jenkins-Hernandez explained why she was so loyal to her then-fiance.

“This is someone you love, who you just had a child with, and you think about your future and what’s happening. I wasn’t going to let him experience it alone. I was going to stick by his side every step of the way,” she said.

2. She Has 1 Daughter & Was Criticized for Bringing Her to Court During Hernandez’s Trial

Jenkins-Hernandez found out that she was pregnant with her first child in 2012. On November 6 (Aaron Hernandez’s birthday) of that year, she gave birth to a baby girl named Avielle.

Avielle was an infant when her dad was arrested on suspicion of murder. She didn’t have much of a relationship with Hernandez, but Jenkins-Hernandez would regularly bring her to see him in jail during visitation hours.

On one occasion, Jenkins-Hernandez brought Avielle to court during Hernandez’s second trial, this time for the murders of Daniel de Abreu and Safiro Furtado (Hernandez was later acquitted in that case).

Hernandez’s face lit up when he saw his daughter. He was all smiles and even blew her kisses before leaving the courtroom. Jenkins-Hernandez was slammed for her decision to bring Avielle to court, many people feeling as though the child was too young to be present or involved in any way.

Here are all of the details surrounding Aaron Hernandez's death we learned from fiancee Shayanna Jenkins https://t.co/FyXqB6tvit pic.twitter.com/m2ScQ3mVe7

Jenkins-Hernandez graduated from Bristol Central High School in Connecticut in 2007. It was in high school that she started dating Hernandez (they actually met in middle school). When he went on to play football at the University of Florida, she stayed back and attended Tunxis Community College in Farmington, Connecticut.

While attending college, she worked for Big Lots Stores. She left the company in 2011, the same year that she graduated from TCC, earning an associates degree.

Hernandez was drafted by the New England Patriots in 2010. He purchased a townhouse, not too far from Gillette Stadium and Jenkins-Hernandez moved in with him. A couple of years later, the couple moved into a $1.3 million home in North Attleboro, Massachusetts, about 30 minutes south of Foxborough.

It is believed that Jenkins-Hernandez was a stay-at-home mom in the years that followed. It is unknown what kind of work she does these days.

4. She Currently Lives in Rhode Island

Jenkins-Hernandez was forced to move out of the home that she shared with her fiance after his estate’s value fell to $0. The Boston Herald previously obtained court documents that stated that Hernandez’s home was worthless. On Friday, April 28, 2017, the 15-room, 7,100-square-foot home has been listed for sale for $1.3 million. In November 2017, the home was sold to a real estate investor, according to the Boston Globe.

Not long after Hernandez’s arrest, Jenkins-Hernandez moved into a condo in North Providence, Rhode Island. According to the Daily Mail, the condo was in Hernandez’s name. It is believed that this is the condo that he first lived in when he was drafted by New England.

Over the course of the past year or so, Jenkins has relocated again. It is believed that she lives in a small home just south of the Massachusetts border.

5. She Has a Strained Relationship with Her Sister, Shaneah, Who Was Dating Odin Lloyd at the Time of His Murder

Jenkins-Hernandez’s sister, Shaneah, was dating Odin Lloyd, the man who Hernandez was convicted of murdering. Shayanna and Shaneah used to be extremely close, but Lloyd’s murder and Hernandez’s subsequent murder conviction, destroyed their relationship.

Shaneah testified in court and told the jury about her relationship with Lloyd and with her sister. She explained that they all used to hang out and would even go to clubs together from time to time.

“Hernandez’s lawyer presented Shaneah with her own grand jury testimony, when she said he had periodically asked if she was OK. Shayanna then shared the notes with Hernandez’s legal team. Shayanna attended just one day of her sister’s testimony – when Shaneah was cross-examined. During that time, the sisters did not make eye contact, except once. Soon after she took the stand, the prosecutor asked if she saw her sister in the courtroom. Shaneah at first said no, until Shayanna craned her neck to make sure she was seen,” the Daily Mail reported.

In May 2013, Shaneah graduated from college and was planning on moving to Boston with Lloyd. The following month, however, Lloyd’s body was found in an industrial park in North Attleboro, Massachusetts, not too far from Hernandez and Jenkins-Hernandez’s home. 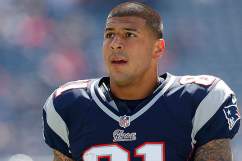